Parenting advice from the Duchess 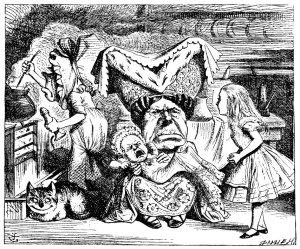 Where’s Supernanny when you need her?

While the Duchess sang the second verse of the song, she kept tossing the baby violently up and down, and the poor little thing howled so, that Alice could hardly hear the words:-

`I speak severely to my boy,
I beat him when he sneezes;
For he can thoroughly enjoy
The pepper when he pleases!’
-Alice’s Adventures in Wonderland

What a lovely nursery rhyme!  Okay, so the Duchess would not be considered parent-of-the-year material.  In fact, the whole shaken baby thing would definitely get her a day in court, unless the child were to turn into a pig, in which case she’d only have to worry about PETA.

But what makes the “perfect” parent?  Obviously we don’t want to beat children for sneezing – not when there are so many other reasons to smack them.  Not saying that I do, of course, but I doubt there’s a real parent on earth who hasn’t thought of it at least once.  This is why television is such a lifesaver.  Without the occasional use of the boob tube babysitter, I bet there’d be a lot more sneezing beatings.

But of course you’ll get the parents who know more than you do.  Nevermind that thus far, you’ve managed to not kill your kids, a very awesome success in itself, these people are certain they are doing it better than you are.  Their precious child never had a bottle, never watched a second of T.V., never threw tantrums, never ate anything but organic homemade food, never had a second of unstructured time.  They did learn to speak, crawl, and walk earlier than other babies.  Also, their children prefer the taste of spinach over chocolate, and eat it all the time, and are involved in every type of sport, and also make straight As.  And then, of course, they wonder – what do YOU do?

I am a slacker mom.  I used to be embarrassed about this, especially around the Stepford wife crowd, found anywhere, but especially known to congregate in churches.  But now I look at my kids, and I realize that they’re not perfect, but they’re happy most of the time.  They weren’t breastfed for years, but they have fewer allergies than their breastfed peers.  They didn’t always walk and crawl and talk right when the book said they should, but my eldest hummed “Twinkle, Twinkle Little Star” to herself at less than a year.

Her little sister was more the scientist type than the artistic – at about 17 months she discovered through personal experimentation that super glue was, in fact, not a poisonous substance.  And this was after quite a few hours of the dreaded Clifford the Big Red Dog, Teletubbies, and Big, Big World, a show that would make the staunchest environmentalist want to burn down a rain forest.  But they did learn from these shows, and as far as I can tell, haven’t lost brain cells because of it.  I might need to tone down the Disney channel, though, because I’m fairly sure I’ve lost some from it merely by secondhand exposure.

Sometimes I get mad at my kids and shout at them.  Sometimes I’m too tired to play.  Sometimes I have to GET OUT before I go completely insane.  They aren’t in any structured activities save church and Girl Scouts.  But thus far they haven’t written a tell-all book about me.  And my eldest even wrote an essay praising my good qualities, including showing them vidoes on Youtube.  Which might have made the teacher wonder.  But, ah well.  When I’m feeling down, I remember that at least I don’t beat them for sneezing.  So, with any luck, they won’t grow up to be pigs after all.