Originally, I had intended the last post to be one post with many summaries.  But since I know a ridiculous amount about this topic, it simply could not be fit into a single blog post.  So now we continue, with the next show on my list: 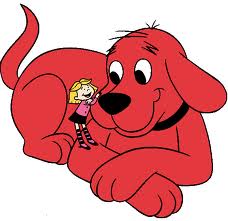 Clifford is based on a children’s book of the same name.  The plot is very complex.  There’s a girl named Emily Elizabeth (E.E cause who wants to repeat that name?) and her big red dog.  They have adventures (though none of the ones you would expect with that situation).  That’s pretty much it.  Now this series has always prompted a lot of questions from me.  The first would have to be – how did Clifford get so big?  The show attempts to answer this in the opening song that clearly should have been a Grammy nominee: “Her love made Clifford grow so big, that the Howards had to leave their home.” 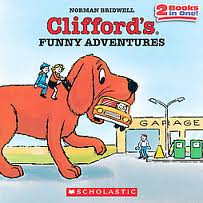 I think the show is lying to our kids, cause I had a dog growing up, and I loved her, yet she did not grow into a forty-five foot dachshund.  So, gonna have to call B.S. on this one.  I’m thinking his growth spurt could only come from one of two possibilities: (1) They live near a leaking nuclear plant or (2) they are putting major steriods in that dog’s food.  Since E.E. has only one head, gonna go with the steroids.

Speaking of the dog’s food, that’s another question.  How do you feed something that big?  The show has a semi truck come and deliver his food.  Okay, fine, but how long are we supposed to think that food will last?  The dog is bigger than her house (or can fit into her house, w/ his head sticking out – his proportions really depend on the artist / animator in question) so he’s going to need a lot to keep going.  Even if they could get that much food every day (and they must, cause E.E. and her family have not been turned into kibble yet), how could they afford it?  I think the answer is simple.  The family signed on as reality T.V. stars, probably with a show on TLC. 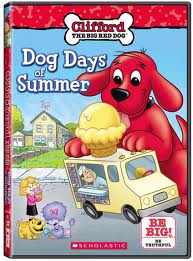 Okay, my last question (and really, this barely scratches the surface) is what happens to the dog poop?  Oh, come on, I cannot be the only person who has wondered about this.  Everything that eats has to eliminate the stuff sometime.  Can you imagine the magnitude of manure the Howards are dealing with?  It would have to be worse than every house ever on Hoarders.  What do they do with it?  Do they rent a forklift as a pooper scooper?  This is never explained, possibly because no one on T.V. ever has to go to the restroom, but I really think it should.  It’s the major reason I have given my children for not having even a regular sized dog.  Come to think of it, Clifford all by himself is a reason not to get a dog. While I don’t think it’s very likely that loving a dog too much could make it mutate to such enormous size, I really don’t think we should take that chance.  The environment will surely thank us. 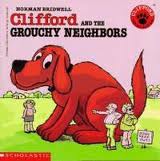 Look what your dog did to my lawn!

I haven’t actually said much about the show itself.  Besides E.E. (a little girl who NEVER changes her clothes) there are her friends, who happen to be mulitcultural friends.  Because everyone I’ve ever known has a Jamaican friend, an Asian friend, a wheelchair bound friend, and a jerk friend.  Okay, maybe just the jerk friend. Her name is Jetta, and she is pure evil in child form, because E.E. can never show negative emotions.  Why E.E. and the others hang out with this kid is a mystery, but I guess it’s because without her, they’d all be sitting around complimenting each other politely all day.  She certainly helps teach the Very Important Lesson of the day which is: don’t act like a jerk like that Jetta kid.

Clifford also has pals, and when the humans aren’t around, they hang out and also learn Very Important Lessons.  His pals are a weenie bulldog and a self-absorbed (surprise) poodle.  They are not mutant sized dogs, so it’s got to be hard to be friends with things you can accidentally step on and smash into the ground.  I admit I used to wish he would step on them, because they are seriously annoying and likely the reason why dogs do not talk in real life (as far as I know).

This show spawned a sequel called “Clifford the small red puppy” about . . . Clifford as a small red puppy.  I watched it a few times, but I never saw E.E. slip the steroids into the food, so I think there is major editing going on there.  Also, they have effectively removed the only thing that made Clifford interesting, which is his size.  If you can’t ride the darn dog to school, then what’s the point? 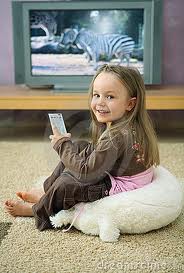 Most parents are exposed to a whole new world they never would have stepped into or even known about had it not been for those little bundles of joy.  For one thing, few people watch children’s programming unless they are parents, or possibly young adult males, for some reason.  I would say the majority of parents have plopped junior in front of the T.V. for a least a few minutes, even if it was only to chisel bits of teething biscuit off the highchair.  However, if you are one of those parents that insist that neither you nor your child were ever exposed to the evil television, I believe you are either:

A. a liar
B. dumb
C. both
Now that we have those people out of the way, we can move on with the real people.   While many parents have used children’s programming to distract children so that they can finish housework or other chores, there are those who often just sat in front of the T.V. with the kids.  I was one of those parents.  I did it because there is research showing that it’s healthy for parents to watch shows with their kids, and most certainly NOT because I was too tired / lazy to wash the dishes.
Because I have so much experience with kids’ shows, and because my brain adamantly refuses to forget any of it, even though it frequently forgets the location of my glasses, I thought I might give some summaries for those of you who somehow missed all the fun.  These shows are on a variety of networks but if you were poor when your kids were very young, like I was, a lot of them came from PBS. (Peasant Broadcasting Station).
So here is number one (more to come!): 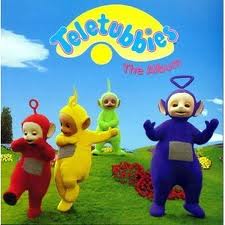 This is a show about four friends who live in their own little world and spout nonsense to each other.  Basically, Seinfeld for children, only the actors wear chubby costumes with TVs on their bellies and antennae on their head.  Which makes them more useful than anybody on Seinfeld, cause who wouldn’t want a T.V. on their stomach?  Talk about the ultimate in convenient travel entertainment.  Except you would probably get a crick in your neck from watching your own belly.  I suppose you could watch your neighbor’s belly, but then you’d want to change channels, and that might be getting too close for comfort.

But back to the show.  The four aliens – or whatever these things are – are Dipsy, Laa Laa, Tinky-Winky, and Po.  Dipsy (that’s dipsy, not tipsy, she’s not drunk -probably) is green and has an antennae that points straight up.  Tinky Winky is purple and has an upside down triangle antennae (more on that later), Po is red and has a circle antennae, and Laa Laa is yellow and . . . confused apparently, because there’s no way she’s getting reception with that thing on her head.

They live in an almost psychedelic environment, with bright green grass and freaking huge rabbits hopping around.  Their only diet seems to come from Tubby Custard and Tubby Toast, which has to give them major digestive troubles.  But that’s okay, because they have a living vacuum cleaner for a pet (now THAT’S the kind of pet I want) named “the Noo-Noo”. 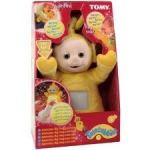 About the only intelligible words they say are “Hello, Bye-bye, eh-oh, and Naughty Noo-Noo”.  This, of course, didn’t stop people from freaking out that the toys were saying bad words.  And that wasn’t the only controversy.  There were also rumors that Tinky-Winky was gay, due to being purple (gay pride color) and having the triangle (gay pride symbol) on his head.  He didn’t help speculation by carrying a purse and wearing a tutu (not that there is anything wrong with that).  Luckily, it was Jerry Falwell, right wing religious nut job, making the accusations so most people just ignored him, and Tinky-Winky avoided the paparazzi.

This was one of my favorite kid shows, for while it was undeniably bizarre and

repetitive (take a drink every time they say “bye-bye”) it was low on the didactic vomit meter.  You couldn’t understand a word these guys were saying, which was fine with me.  Some thought there wasn’t enough educational value, but I will tell you that my kid could say “eh oh” better than anyone else on the block, so there.