A lot of people put down T.V. because they think it makes kids lazy.  I protest, for often my children watched T.V. while standing on their heads, or jumping on my back, which was revenge for when I used to turn somersaults in front of the set, narrowly avoiding electrocution each time.  At any rate, in order to appease those who think T.V. makes you sedentary and brainless (imagine that!), network executives came up with the brilliant idea of “interactive” children’s shows.  These are shows that ask kids to help the people on the screen, usually by shouting out obvious solutions to the problems of very stupid characters.

I picked two of these shows to highlight, although I warn you now these reviews might cause PTSD in susceptible parents.  First up: 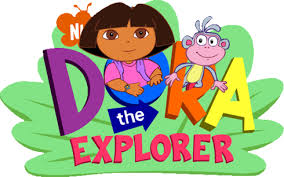 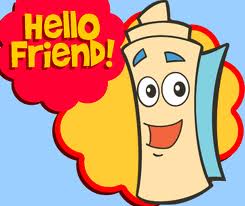 Yeah, um, no thanks.

Next an arrow – like a giant, supernatural mouse pointer – “clicks” on whatever object the child is supposed to select.  So it’s like a cartoon computer program, for annoying children who grew up with computers and frequently slam their hands into storybooks expecting them to talk.  I guess the arrow helps them identify the obvious even more . . . obviously.

Since Dora is Hispanic, she often teaches the kids Spanish words, mostly by repeating herself, which if you haven’t noticed, is a major pattern in this show.  I mean, sure, I’ve heard of Spanglish, or using a mixture of English and Spanish, but this kid just says the same thing in two different languages.  Here we go again: “Come on Vamanos!  Everybody let’s go! “

Okay, so basically this is what Dora is saying, if you just keep it all in English.  “Come on, everybody let’s go!  Everybody let’s go!”  Do you know anyone that talks like that?  If so, they’ve probably been damaged by children’s T.V.  Anyway, besides teaching Spanish, Dora also teaches kids about using a map to get somewhere, which admittedly, most adults still haven’t figured out either.  Each episode, she pulls out a map and points to three places they have to go on their way.  It’s always three places, no matter what.  It could be to the bathroom, and still she would have three stops.  And she would point each one out.  Repeatedly.

Okay, first the river, then the bridge then . . .what is that thing hanging from the mountain???

By the time Dora has done this a dozen or so times, the kids have gotten the hang of it and are calling out answers to her.  But she doesn’t just want help with direction.  She also needs help with basic motor skills, like when she says “Jump! Salta!  Say it with me!  Salta!  Salta!  Saaaaaaaaaaltaaaaaa!”.  Executives and parenting experts think this means the show is actively engaging the child’s brain, which I guess it is, but only so the child can get the character to SHUT UP ALREADY.

To spice things up, the show has a villain fox named Swiper, because he . . . swipes stuff.  Which I guess is a better name than Clepto.  He has to be one of the dumbest crooks ever though, because he’s always stealing things like parts of railroad track, rather than, say, an Xbox that he could sell on Ebay.  He’s also easy to turn away.  All you have to do is yell – you all remember it, don’t you? “Swiper, no swiping!”

Swiper, what are you doing with that chipmunk . . . noooo!

And magically he stops what he’s doing, says “Oh, man” and leaves.  Imagine if every criminal was that easy to discourage.  My brother pointed out that this could inadvertently encourage children to say “Sniper, no sniping” which would be a pretty bad idea, considering that the sniper would be much more likely to shoot you in the head as snap his fingers in frustration.  But I guess it’s worth a try, huh?  Hint: It might be more effective if you know how to ask in both languages, just in case he’s bilingual.

The second of our interactive T.V. shows is about a dog named Blue and her human owner, who is the stupidest man on earth.  There have actually been two owners of Blue – who you notice gets her name in the title over him, despite being not only a dog, but a cartoon dog.  You can’t blame them, though, since Blue is arguably the brightest one.  Steve was first, before he left for “college”.  Personally, I don’t think he was ready for college.  Except maybe clown college.

Never fear, though, for Steve’s brother Joe steps in next.  I liked Joe a little better, because he was at least cuter, even if there was a vacancy behind those pretty eyes.   Unlike Dora, Steve and Joe – for simplification I’ll call them Stejoe – don’t use a map.  That’s way too complicated.  Instead they must search for clues; difficult, considering neither of them has one.  Blue leaves these clues all over the house and yard in the form of paw prints.  This would annoy the heck out of me, but I guess it is better than her leaving “presents” for us instead. 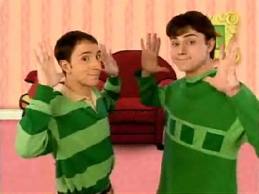 Clearly the dumbs runs in the family

Blue starts the show by leaving clues for kids to follow in order to guess what she’s thinking.  Because unlike Lassie, she can’t convey this in yips.  Of course she can’t talk – she’s a dog.  Everything else can talk, though, including the mailbox, a clock, a bar of soap, a shovel, a pail, a sidetable drawer, and, naturally, the salt and pepper shakers (Mr. Salt and Mrs. Pepper).  (By the way, these two got married and had a baby named Paprika.  Don’t ask.)

Get off my breakfast table this instant!

Blue leaves her clues on various objects, and Stejoe searches for them, often walking into walls, getting confused, and walking into the same wall again.  Not really, but this wouldn’t surprise me.   The clues are always out in plain sight, but somehow Stejoe just never sees them.  This frustrated my youngest daughter so much that by three she was shouting at the T.V. in frustration “It’s THERE.  Right THERE!  THERE!!!!” 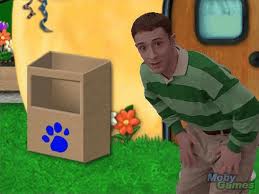 The clue is WHERE now?

Once Stejoe finally gets the hint, he writes down the clue on a notepad.  Because the guy can’t remember squat.  Actually, he draws it, because he’s also not so hot at reading or writing.  Along the way, he stops and talks to the inanimate objects, who give him advice like “Right in front of your face, you dork.”  You know it’s bad when you have less intelligence than the salt shaker.

Once Steve has gathered all the clues, he has kids help him guess the answer.  Because trust me, he would never, ever get there on his own.  One thing I’ll give him – he was always very polite, even when I answered his questions rather rudely.

The concept of both shows is really not that bad.  It’s great to teach kids to look for clues and solve mysteries, and everyone needs to know where they’re going.  A few words of Spanish are nice too, for those moments when you must demand that a Spanish person jump.  But the repetition is hard on us parents, who spend most of our lives repeating things anyway, to no avail.  “Get your shoes.  Your shoes.  On your feet.  Your feet. They’re right there.  There!!!  Your shoes!” and so on.  So obviously repetition is not the answer, since it has never worked for me, so why further punish people?  Just get the kids a GPS and a game of Clue and be done with it.

Didactic: Sing with me!

©Alice and aliceatwonderland.wordpress.com, [2011-]. Unauthorized use and/or duplication of this material without express and written permission from this blog’s author and/or owner is strictly prohibited and may be punished by removal of head by Her Majesty, the Queen of Hearts. Excerpts and links may be used, provided that full and clear credit is given to Alice and aliceatwonderland.wordpress.com with appropriate and specific direction to the original content.
Loading Comments...
Comment
×
%d bloggers like this: