The Things and I were eating at Wendy’s and came up with a fabulous idea for a new kid’s T.V. show.  In their Kid’s Meals, they got “smart links” that you can attach together to form a giraffe.  If you squint.  A lot.  They each got a set, so we decided to make our own . . . creation.  Meet Mutey – the mutant giraffe.

Mutey is a mutant, but he’s just like YOU!  Only he was raised in nuclear waste.  And has two heads.  And two stomachs.  And we’re not sure about the other parts.  But otherwise, just like YOU and ME.  He’s special!  Not only that, he has special friends too! 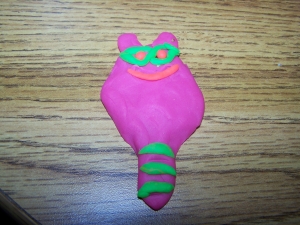 This is Mutey’s best bud.  My husband came up with him while we were excitedly discussing our new show in front of several somewhat worried Wendy’s customers.  Roady the Roadkill Raccoon was involved in an unfortunate accident and flattened but reanimated with the powers of electricity and play-doh!

But that’s not all.  Mutey has other friends who make special appearances from time to time to brighten everyone’s day!  They also teach lessons like the ABCs, only backwards, and numbers from eleventy billion to -286. 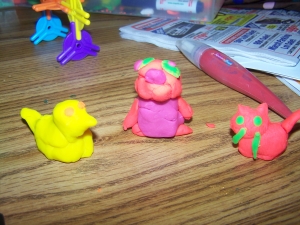 Creepy Face – like Baby Sun from Teletubbies, only Creepier!

And many, many more as soon as our twisted imaginations come up with them!  Anyway, we put a lot of thought into this (like the last 20 minutes or so) and decided on a title and a theme song.  Check it out: 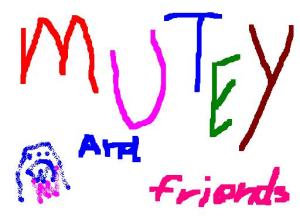 This is going to be picked up by PBS any day now!

And the theme song for “Mutey and Friends”

Catchy, isn’t it?  We thought so.  And so will the kids!  Once they climb out from under their beds!

So what do you think?  Have we got a great pitch, or what?