Home stretch, peeps, home stretch.  It’s like when you’re doing Yoga, and the nice lady tells you to just hold that awkward pose for a little bit longer.  Just a little bit.  And you fall over and Charlie Horse!  Wait, no, we are going to hold the pose, guys.  And I just lost track of my own metaphor.

Anyway, I asked two questions to my faithful and somewhat deranged readers.  Question 1: In Chapter 21, why does Ana believe she deserves a Congressional Medal of Honor?  Question 2: In Chapter 22, we get another ZOMG random plot device!  Any guesses what it is?  It’s dumber than you think, I bet!

In response there were Veggietale song lyrics about Ana’s vagina (the Veggietale / 50 Shades of Grey crossover sounds more promising all the time), mentions of Ana winning a medal by orgasming and queefing and giving the best BJs ever, and finally, several people pointed out that there could be no plot device in lieu of an actual plot.  Good points, all.

I also received this disturbing information from purpleperceptions in my email.  It made me faceplant on my desk.  Repeatedly.  Here it is:

No time for tears.  Let’s get on with this incredible writing, shall we?  So last we left Ana-dumkins, she was freaked out because Christipoo had been out with the “bitch troll” Mrs. Robinson, Christian’s ex that she does not obsess about constantly.  Oh, she can forgive all the other stuff Christian does: the emotional abuse, the beatings, the way he makes her fear for her safety – but crap, he had a drink with his ex!  That is unforgivable.  So she “rocks to and fro” like baby, with “hot scalding tears” and I don’t give a shit.

When she’d done whining for a bit, she looks through Christian’s emails and finds one about crap related to the investigation into that guy who tried to rape and kidnap her.  Ana thinks, meh, and goes back to bitching to herself about the ex.  You know how some people sleep on the couch when they’re mad?  Well, Ana locks herself in the playroom where Christian beats her, and goes right to sleep.  Yeah.

So the next morning, Ana comes out and has this argument with Christian, or rather, she mostly ignores the asshole.  Wait, what was that – a – a – spine?  No way.  She purposely takes off her clothes in front of him, does this twisted strip tease thing, and okay, maybe a spine, but a stupid one, wtf.  She actually says stuff that makes sense, like that she “chose a defenseless baby” over her “spineless” husband.  Hey, way to go, Ana!  Those are some awesome last words there!

Ana goes on about how hot she looks, blah blah and Christian notices and starts to make a move.  She tells him she’ll scream if he comes closer, he says no one will hear her (gawds this is so romantic) and she asks if he’s trying to frighten her. Christian is dumbfounded.  Dur, that makes you scared when I say stuffs like that?  Yet Ana thinks that if he touches her, she will surely succumb to his “sexpertise” but since she doesn’t, she clearly “deserves a Congressional Medal of Honor”.  You know who really deserves that medal, Ana?  The readers, that’s who.

We all deserve a piece of this medal, my peeps.

Since I know you can’t stand the suspense, we’ll go right into Chapter 22.  Jack informs the “prick-teasing, gold-digging whore” Ana that he has kidnapped that “little bitch” Mia.  You have to love the cute nicknames they give the women in these books.  In case you’ve forgotten (I’ve tried) Mia is Christian’s irritating, chirpy little sister.  He tells Ana to get 5 million dollars to him but not to tell Christian or his security team or the cops (pfft, like anyone goes to the cops in these books?)  Ana, brilliant girl that she is, agrees to his demands.

This sounds familiar.  I have images of a dance studio, and another stupid skinny chick being tossed into mirrors because she went to rescue someone without the help of those more powerful.  Could it be . . . nah, this is a COMPLETELY original book, you guys. 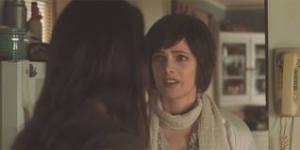 Bella, I had a vision of someone copying our book but doing an even WORSE job!

Jack says he’ll “fuck Mia up” before he kills her and I’m wondering if he means beat her or rape her or just insult her because fuck is used so often in this book I don’t know what they’re talking about anymore.  Ana tells her secretary she has to leave early, again, as if this is a big thing.  She hasn’t done a damn thing since she took the job but email, leave early, and yammer with Christian and his ex-girlfriends.

She finds Leila’s loaded gun that Christian tossed in the drawer and thinks “Jeez, he could get hurt” and I’m thinking if only. There’s a bunch of wacky hijinks with Ana tricking the security team and peeling out in her car (she gets to drive!) on her way to the bank (which is sleek, modern, and understated by the way).  She asks the teller for 5 million and the teller (named Ms. Insincere Smile) immediately hops to when she hears that Ana is Christian’s wife.  OMG a celebrity!  Being married to Christian makes her even cooler than that Kardashian chick.

Leila, get your gun!

But eh oh, the teller guy calls Christian just because some strange chick claiming to be his wife wants to take out 5 million.  I mean, jeez.  Christian assumes she must be leaving him (like she’s that intelligent) and Ana goes with it since she doesn’t want Christipoo to interfere while she rescues the Cocker Spaniel, er, his sister.  He tells her to take all the money and Ana wonders why oh why was she so upset just because he beat her and hung her up on the ceiling and constantly berated her for breathing funny?

Ana starts “weeping copiously” and the teller asks if he can get her some water (again with the water) and Ana says sure.  Not like she’s on a deadline or anything.  She feels the reassuring pistol at her waist and wait a freaking second – she’s in a bank and they didn’t even . . . nevermind.  Jack informs her that there’s a getaway car in the back of the bank (the Dodge!  I hope it is painted up like the Joker’s car.  That would be perfect.)

It’s not the Joker in the car, but Elizabeth from the office (she was, like Jack’s boss, I think? I don’t care).  They meet up with Jack at an abandoned playground (what no dance studio?) and suddenly we really are in a Batman episode.  Jack slaps Ana (WHAP!), she bounces onto the concrete (BANG!) and then he kicks her in the ribs (KAPOW!)  Ana remembers the gun and shoots him in the knee (PING!) and then passes out (WONK!)  Chapter End.

Hmm, Ana is calling for help. Let’s wait this out, Robin.