Here’s my second (and last) Facebook update with Sad Pony and Squirrel.  For the other two click here and here.  Thus far Squirrel has twelve friends.  All of his friends are my blogging buddies.  Some people would call them “enablers”, but I call them freaking awesome.  He has sent out friend requests to Jethro from NCIS and Sarah Palin.  No response from Jethro, but Sarah froze my Facebook page demanding personal information from me and I had to shut it down to get rid of her scary face.  You know, I’m thinking maybe that wasn’t really Sarah Palin.

Squirrel has gone around manically “liking” everything from Zingers and Energy drinks to every TV show with the word “Bachelor” in it.  So we get lots of posts from these companies.  And people not only like them, they actually comment on them.  It says something when you are a squirrel on Facebook, but you don’t come close to keeping up with the weird.  For instance, Fisher Nuts asks you to fill in the blank.  Their latest: “This weekend I plan to ____ with ____.  They really shouldn’t have left themselves so open there.  (Click to enlarge.) 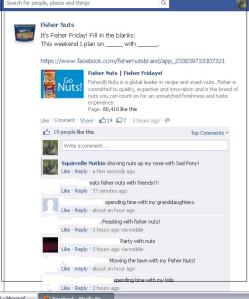 I like my answer best, though the guy mowing the lawn with his nuts is also amusing.

I was most curious about what sort of advertisements the two would get.  Here are some of Squirrel’s.  I’m not sure why. (Click to enlarge) 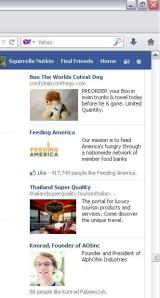 My favorite is the one about luxury travel. High on every squirrel’s list.

The “friending” stuff has been amusing in other ways.  One of my IRL (in real life) pals is also a blogging buddy.  Here’s what happened when one of my pals came up as a “suggested friend” on her facebook page. (Click to enlarge) 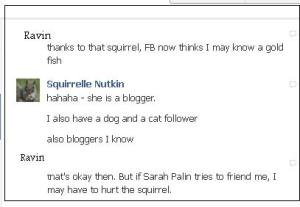 So many animal friends on Facebook, so little time.

But what about Sad Pony?  Oh, he’s been active as well.  Well, as active as he gets, which is using a mouse with his teeth.  He has tried to friend several My Little Ponies but gotten no response.  Rude.  I guess maybe it would help if he were pink and glittery.

Sad Pony has not “liked” as well as Squirrel because he doesn’t like many things.  Mostly he posts gloomy Facebook updates, because everybody loves that one friend who ONLY posts gloom and doom.  On the other hand, excessively happy people can get annoying too.  Observe: (click to enlarge)

Those two do have fun.

Sad Pony also got some strange advertisers, including a group that was concerned he was on Meth.  I think they should have targeted that to Squirrel, personally.  But what does Facebook know?

Not much.  Neither do I.  Though this has been interesting and at times amusing, I think it’s time to draw this experiment to a close.  For one thing, it is very easy to cross the line of stupidity and offend people.  Yes even I realized that.  And if I’m going to friend fellow bloggers, I’d rather do so as Alice.  Or the girl behind the curtain, ie the writer behind Alice. 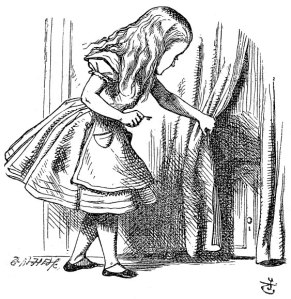 Pay no attention to the writer behind the curtain.

But it’s a tricky thing.  Part of me wants to share with all of you more of me, but the other part gets a little freaked out.  When you blog, it is easier to express stuff, even stuff you wouldn’t normally express, when you are anonymous.  On the other hand, it frees you to express this stuff without accountability.  Should we be held accountable?

Yeah, I’m getting all serious here, and maybe too serious.  Does it matter what we reveal on Facebook, especially if we are careful to keep everything private (by constantly checking to make sure Zuckerberg hasn’t changed the settings AGAIN)?  I’m well aware that most people could get that information about me in other ways, if they really wanted to do so.

I’d love to interact more with blogger friends, because you can get to know people better through other social media such as Facebook.  On the other hand, some things make me uncomfortable. Why does Facebook feel the need to keep suggesting the friends of my friends?  Maybe they don’t want to be suggested as friends, but they don’t have a choice.

Then there is the time issue – do I have time to waste on Facebook what with all my time already being wasted on blogging and silly computer games?  And it’s so easy to lose track of time on a site like that, when really I should be paying attention to my Things and that husband guy occasionally.

So as Sad Pony and Squirrel disappear from Facebook, I ask you some questions.  How close are you with blogger friends?  Do you have many on Facebook or other social media?  Have you ever thought of tossing your Facebook account?  Do you worry about privacy?  I know many people have family on there, but thank goodness, I do not.  So there’s not that tie for me.  If you didn’t have a tie like that, would you still Facebook?

Let me know in the comments below.  And thanks to everybody for playing along.  You guyz are great.