This is one of those times I think they should probably revoke my parenting license.

A while back, Angie over at Childhood Relived once again brought back one of those nightmarish 80s memories.  She’s really good at that.  This one involved a monkey.  Or is it a baby?  No, it is some bizarre conglomeration of the two, like Frankenstein’s Chimpbaby.  It was originally an import from Japan, so you know right there it’s gonna be weird.  The toy is called Monchhichi and this is what it looks like.

Yeah, I know, right?  Creepy.  So not so long after that post, my father returns with, you’ll never guess, a Monchhichi !  He found it at a garage sale.  My first thought, after freaking out just a little bit, was hey, I can get money for this thing.  No such luck.  A search on Amazon revealed that this was an earlier reissue in the 1990s.  You can tell because it has blue eyes, not brown, or something stupid that only people who collect these freaked out creatures would notice.

So I went ahead and gave it to Thing Two.  But it still wigged me out a little.  And so – this is when we get to the parenting issue – I had an idea.  I’d make up a back story for it.  It’s not the first time I’ve done this.  When the kids were younger, I was reading one of those irritating children’s stories.  This one was about a bear named Hug-Me which naturally provoked the Gag-Me response.  Hug-Me can’t decide what sort of day it is so he walks around his house and asks all his friends, who do various things like tying him up as part of a game (I’m not making this up).  Also, there is a clown doll (called Clownie, of course) that just randomly appears, prompting  a scream of terror from me.

But it gets weirder.  See Hug-Me is a stuffed bear, and all his friends are stuffed, and never once do you see any real people.  I found it suspicious that a bunch of animated stuffed animals lived alone in a human house. Where were the people?  What did these animated clowns, bears, and whatevers do to them?

I decided that it had to be foul play.  And to entertain myself, I started changing up the story as I read.  See the stuffed animals launched a revolt and ate the humans (or imprisoned them in the basement) and now they are livin’ it up in their house.  The girls, predictably, loved the story and wanted me to reread it. They still do.  I had to tell them we couldn’t read it at Grammy’s house.  She already has her doubts about me.

But I was going to tell you about Monchhichi .  See, I got this bright idea one day to make up a story about him, a legend if you will.  A bright and cheery one, sort of like the Legend of Sleepy Hollow.  This legend tells that the chimpbaby Monchhichi is actually a tiny monster that comes to life while children are sleeping and likes to live in their armpits.  It’s warm there.  The girls found it hysterical.  Now you do NOT want to be around that stuffed animal because it WILL find its way into your armpit via one of my children.  There is no stopping it.  So I’m actually starting to fear a creature of my own creation.  Where will he pop up next?  Will I be sure to have both arms down?  You just never know.

So that’s why, if there were a parenting license, I would probably not get one.  Generally parents are supposed to protect their kids from nightmares, not create them.  Wouldn’t you like me to babysit your small children?  I’ll bring the Monchhichi .  They SAY Monchhichi means happiness, but I think it means armpit goblin.  You decide. 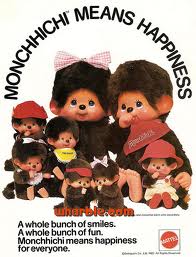