Good old Haley.  This guy has been handing out hints for something like, oh 95 years or so.  If you dig around, you can find some good stuff, like say cheap ways of cleaning or some neat trick of storing fruit.  But for every normal hint he gives you, there seems to be at least a dozen that make you go wtf?  Here’s some examples.

(These hints, honest-to-goodness, come from the book Haley’s Hints GREEN Edition by Graham and Rosemary Haley) 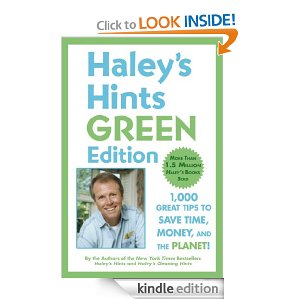 See? The book is totally green. And stuff.

Alice says, “I’m not drinking that.”

Haley says “The next time you slice cheese, spread a little butter on the exposed area.  It’ll stop it from drying and becoming hard.”

Alice says “No, I can’t help you, I’m busy buttering my cheese!” 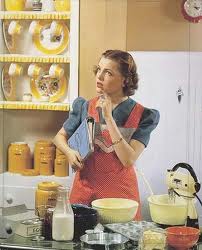 I buttered the cheese but – did I leave the cake out in the rain?

Alice says “Honey, why do my tights smell like dip?”

Alice says, “I’m not cleaning with my husband’s underwear.  Do you know where that’s been?  And btw, how does Hayley know this works?”

Well, I guess the floors couldn’t get much dirtier anyway . . .

Haley says, “It’s not a good idea to use bleach to clean your aluminum percolator . . . instead, fill it up with water and add a quarter cup of cream of tartar.”

Alice says, “What’s an aluminum percolator?  What is cream of tartar?”

Hayley says “Rust can be removed from metal baking dishes by scouring them well with half a potato and your favorite soap powder.”

Alice says “Save your potato.  The rust adds minerals to your diet.”

How to Get Blood Out of Carpet

Alice says “How will I get out the blood from that sacrificial goat out of my carpet?- oh, hey, I’ll just spray my shaving cream on that sucker.”

Alice says, “How did Haley figure this out?  I can just imagine.  I continue to have all these stubborn bloodstains but the damn spot just won’t come out, no matter how hard I scrub.  What can I use?  Oh, hey, I know – meat tenderizer!  On the carpet!  Sure, why not.”

Man: Still can’t get that blood out . . . all that blood.
Woman: Did you try the meat tenderizer?

Alice says, “I think Hayley has more serious problems than just carpet stains.  Has anyone seen Mrs. Haley?  Someone should maybe investigate.”