Islands in the Street: WTF Are They Saying Songs

Have you ever sung along to a song only to go “la la la” at times when the song, for once, wasn’t using “la la la”, “na na na” or “hum-diddy-do” to fill up space?  I’ve been doing this for ages, and only since the arrival of the almighty Google have we had a chance to figure out exactly what these artists are singing.  And how badly we’ve been goofing it up.

For my first example, I want you to think way back to Dolly “Double D” Parton and Kenny Rogers.  Even if you dislike country music, you probably know who these two are and some of the songs they are famous for – you know, like Kenny Roger’s “The Gambler.”  Well you would know unless you are twindaddy who I swear had never heard of this song before I brought it up.  How do you miss this song?  Know when to hold ‘em?  Know when to fold ‘em? It’s everywhere.  Please people, do inform him of this in the comments.  Thank you. 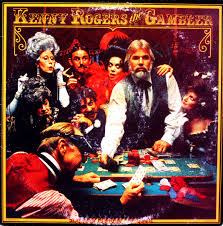 But I’m not talking about “The Gambler”, cause most people, (except twindaddy) know the lyrics to that one.  Kenny Rogers also did a duet with Dolly Parton called “Islands in the Stream” back when I was a little kid.  I thought, for the longest time, they were singing “Islands in the Street.”  That made no sense at all.  Why was there an island in the middle of the street?  Then I realized it was stream.  And it still made no sense.  It’s a stream, why is there an island in the middle?  And wtf does that have to do with love? 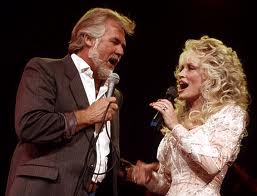 Another song that has puzzled me for ages is “Blinded by the Light” by Bruce Springsteen.  You know that line where he says “Blinded by the light, wrapped up like a douche in the middle of the night”?  How do you get wrapped up like a douche?  That’s kooky and gross, Bruce.  No wonder you do this in the middle of the night.  Well, that’s what I thought until, to be fair, twindaddy pointed out that he wasn’t saying “douche” he was saying “deuce.”  The line was “revved up like a deuce, another runner in the night.”  Oh, okay, well that’s so much clearer now, I mean wait a second.  A Deuce can be so many things, depending on whether we’re talking about the regular definition or the slang, but either way, the lyrics are still stupid.  Bruce is saying he is revved up by either A. a playing card, B. peace out, C. cool, or D. poop.  Let’s hope it’s not D.  Even the feminine hygiene product sounds better than that.

Just for fun, here’s the video.  Bruce starts it off saying “We’ve never done this.  Hope we can do it.”  No comment there.  Just watch and see if you can understand ANYTHING this man is saying.

One of my favorite songs is Aretha’s Frankin’s well known anthem “Respect.”  But there are some lyrics I’ve never gotten until good old Google.  No, I understand the “sock it to me” although I’m not sure why she wants someone to sock her.  What I didn’t get was the last line of that famous chorus:

Find out what it means to me

Okay, so that was the way I’ve been singing it all this time. Turns out she was saying “Take Care, TCB.”  Great, so now I had to look up “tcb” which, according to the great Wikipedia means “taking care of business.”  Another interesting fact: originally the song was sung by a man who used respect as a euphemism for a woman putting out.  I have to appreciate the irony of taking a sexist song and making it an anthem for women’s liberation.  You go, Aretha.

Don’t care if you do have an enormous furry green caterpillar around your neck, you ROCK, Aretha.

One thing you might notice from these mixed up lyrics songs is that all of them are supposedly written in ENGLISH.  Whether the line is crazy or the singer just slurs the words, somehow it comes out as unintelligible as a foreign language.  The person might as well be singing in Spanish.  Speaking of, one of my on-the-ball readers, James, pointed out to me that the English translation of Macarena says that she is cheating on her boyfriend who is currently enlisting in the service.  Congrats, Mac, you actually made me have even less r-e-s-p-e-c-t for you.  That’s impressive.

I could tell you more about the meanings of famous songs sung in foreign languages that we have cheerfully been singing along with for ages, but I’ve already filled your heads with enough earworms to last a few weeks so I’ll save it for next time.

Posted in: Reviews | Tagged: blinded by the light, Bruce Springsteen, do you know who the last picture is of?, everyone knows the Gambler but twindaddy, humor, Islands in the Stream, mixed up lyrics, respect, song reviews, wrapped up like a douche