I think TLC knows I decided to cover “Sex Sent Me to the ER” (from here on out known as “ER Sexy Times”) and “Strange Addictions” through that psychic lady of theirs.  Because on Wednesday, they decided to show the shows back to back.  And I watched them, back to back, because I’m covering them for this here blog and because I did not want to get up.  I’ll start with ER Sexy Times and get you Strange Addictions next time.  It’s a doozy.

Here we go.  First moron couple is doing the horizontal mambo when the guy starts itching on his face, and then his “down there”.  He gets a nasty rash that he decides needs to be seen in the ER, though the girlfriend’s like, hey, no biggie.  Cause, like, it wasn’t on her va-jay-jay, right?  So the doctor is super helpful, saying oh it could be VD, or maybe not, I don’t know.  I don’t even know why I’m here wearing this coat, actually.  So the guy accuses the girlfriend of cheating on him, and they don’t speak for a week, and then it turns out it’s not VD just a reaction to something, and he forgets about it.

Until she brings it up later.  Just, really, why would you do this?  She admits that she used lotion all over her body and by all over, I mean, really all over and under and everything.  I’m not sure I know of any lotion that’s okay for your nether regions.  At any rate, it certainly wasn’t okay for his.  He is understandably upset by her just now telling him this, but it’s okay, because she’s still offering sex.

Next a professional fighter and his girlfriend are off in Malaysia where he has a match.  Girlfriend decides to literally jump him, but she gets off just a tad, and comes down realllly hard, and BAM, time out guys.  Slinky is bent and bleeding all over the place.  The couple are calm and collected, though.  Just kidding. They act like the Sims characters when you set them on fire.  They run to the bathroom, where he grabs a towel and then faints from the blood loss and fractures his jaw on the floor.  And then he wakes up and says “Get me to the hospital.”  Just kidding.  He tells her to get ice.  For his broken, blood-spurting penis.  Finally, one of them gets the idea to call for an ambulance.  Oh, do you think? 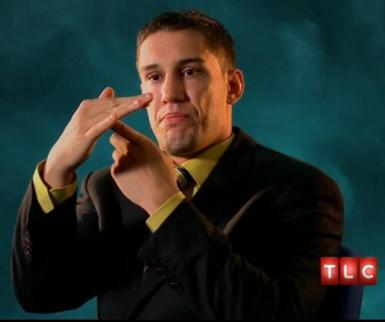 They take him in where the doctor explains that you can break your peen because something about lots of blood built up and spongy tissue and all I remember was OUCHIE and he says it only happens to like 1,000 out of millions of guys but somehow TLC has found two of them in the first two episodes I’ve seen.  Impressive, TLC.  Malaysia is obviously not big on HIPPA and so everyone in the hospital, down to the janitor, learns of his broken pee pee and come to investigate.  Poor dude.  But when he gets out, it’s all okay, and he and girlfriend go at it again.  I dunno.  I think I’d be a bit wary of that chick, myself.  But, you know, she offered sex.

Finally, our last moron couple decides it’d be fun to role play as vampire and victim.  But first they take some ecstasy, because I’m guessing you have to be really stoned in order to play something this idiotic.  She is blindfolded and chained to the bed in her lingerie.   He is flapping around the room with fake fangs and a cape, making the actual Edward from Twilight look dignified in all his sparkly glory.  Nothing could possibly go wrong here.  Unless, you know, he trips over a coffee table and fractures his skull. 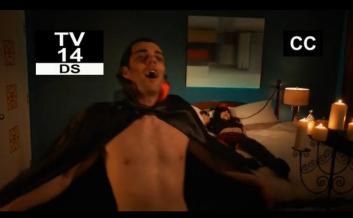 When you make Twilight vampires look cool, you’re in trouble.

So he’s on the ground unconscious, and she’s yelling for her Edward, but too stoned to really know wtf is going on.  Fortunately, or unfortunately considering these two might go on to breed, a neighbor hears her and phones 911 and he is taken to the hospital.  She shows up later, ranting about her immortal lover while the doctors try to figure out what the hell happened.  The doctor quips, “I always think I can never be surprised and then I am.”  I’m sure you are, doc.  And how lucky that TLC is here to reenact it for you!  You see, the lovers are either awful actors or playing themselves (same thing), but the doctors are usually real.  I’m guessing they figured they’d make a lot more money doing this show than, you know, saving lives, which says something about our society.

So does the vampire couple.  Surgeons elsewhere operate on the guy and fix his skull, and while this is going on, the doctors try to get the girlfriend’s chains unlocked because naturally there is only one key and these are real, freaking chains.  The doctor mentions that maybe they should have had a backup plan.  Like, say, not being stoned, and not being tied up, and not dressing stupidly, and not tripping over coffee tables and managing to fracture your skull.  That kind of thing.  Good luck, doc.

So what do you guys think?  Any of you guys broken a peen?  Can you think of any other words I can use in place of the names of actual body parts?

Posted in: Reviews | Tagged: humor, lame vampires, Sex Sent Me to the ER, TLC, when in danger when in doubt run in circles scream and shout, WTF