Barbie in the Real World

I think I’ve mentioned before how much I love dolls.  I loved them as a kid, and I love them now.  My favorite thing to do was to play with Barbie and her house and her furniture and her clothes and her car (shoes suffice if you cannot afford the Corvette) and her red-headed friend Midge who had to get married cause Barbie’s weddings are all dream ones, great ornamental boyfriends with dead zombie eyes, and all those sisters, Skipper (who recently acquired tiny boobs), and Stacie and Kelly who became Chelsea cause I have no idea.  There’s even a baby, except the baby is totally not hers, it’s another little sister.  Even though Barbie’s like at least 25.  Suuuure, Barbie, we totally believe you.  By the way, have you contacted Duke from G.I. Joe for support payments?  Just wondering.

And therein lies the fun of playing house when you’re older.  You can sneak in all that real-life stuff that goes on behind the dream house.  In other words, you can make Barbie’s life just as dysfunctional as your own.  At least that’s what the girls and I like to do.  I am so glad I had girls so that I can say I’m totally buying this crap for them.  Though, really, why be ashamed?  ES has ponies!  And lots of people collect stuff.  It keeps us young.  And immature.  And for a little while, you forget about your real laundry or real toilet or real job.

I will not go into the number of disturbing pics I found involving Barbie and the potty. Suffice it to say, even Barbie poops.

Cause Barbie does it all.  I love that they recently gave that chick a washer and a dryer.  She had to have Cinderella come over to show her how to use it.  On the plus side, she loves pink, so not knowing how to sort works out well for her.  And if the clothes are totally wrecked, she just buys more on the credit card she took out in Ken’s name that he doesn’t know about yet. 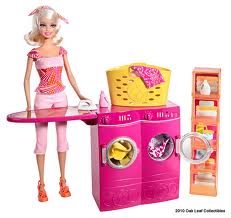 It is okay to put cats in the washer, right?

She’s had roughly 300 careers or so, probably cause she is constantly fired once they realize her resume is full of fake stuff like “Totally went to the moon once” and “good with children and zoo animals.”  Still, she manages to keep up appearances by owing about half the national debt and otherwise hitting up various boyfriends for nice presents.  Like Paris Hilton, only Barbie’s not quite so plastic.

That card has got to be hard to carry around in her purse.

One of Barbie’s most recent careers is “Entrepreneur” – she comes with an Ipad, a cellphone, and of course a purse.  My brother snorted and said she couldn’t even spell entrepreneur much less be one, but she also ran for president a while back, and that doesn’t require spelling or even knowledge of geography, so I figure she’ll be just fine.  Maybe she’ll open an account on Etsy and fill it with clothes she ripped off from her friends.  Midge is a married crone now, so she will never miss all the nice stuff she used to wear.

Elect me cause (giggle).

Barbie’s friends come and go, probably because she’s a selfish twit.  On the other hand, she might be sneakier than we know, and have them buried under her dream house.  Now that would be an interesting new career: serial killer.  More realistic than cop (though this would be the best cover-up) or pilot (I would not get on her plane).

Can we get off now, this doesn’t look safe. Moooom, Mommmm!

Anyway, since she can’t keep Barbie friends, she hangs with the Disney princesses, cause all those gals are catty.  Sure they look nice in the movies, but you didn’t see when Sleeping Beauty (Aurora) went out with Prince Charming (I saw someone say his name was Adam but I really think it was Charming cause his father was a moron)- there was a nasty fight there.  But as it turned out, it was all a simple mistake.  Aurora was drowsy and those  princes are so hard to tell apart anyway.  So all was forgiven.  After Cinderella let her mice out in Aurora’s castle.

Don’t mess with me, girlfriend.

Anyway, we’ve had some fun playing Life after the Fairy Tale with Barbie and her Princess Posse.  Not that surprising – remember we glittered the crap out of a pony.  Anyway, if you’re feeling down, grab a Barbie and relive your childhood.  Giving her a mohawk is a good first step.

Leave a Reply to List of X Cancel reply