Before I start this post, I’d just like to say this new editor sucks. Seriously sucks.  And now I can’t find where to go back to the old one anymore.  WordPress, you suck. Where the hell is the old editor?  If I see one more boop beep bop I’m gonna blow.

Okay, done – for now, saying this post even posts since it’s on this new stupid editor arghhhhhhhh.

Okay, so I don’t watch the news much because it is really depressing and stupid, and I get enough of that in real life.  Also in fiction, seeing as authors, even kid authors, have decided to kill off main plot characters for funsies.  Like, what the hell is that about authors?  It’s not dramatic, it’s just being a jerk to your readers.  I mean, sure, you gotta kill a few off but that’s what red shirts are for – you know, the guys on Star Trek that they took down on the away teams to alien planets who were not listed in the opening credits so you knew they were gonna die?  Put in more of those guys.  Fiction is for escape, not further punishment.  Make a note.  Try something funny for once, for God’s sake. 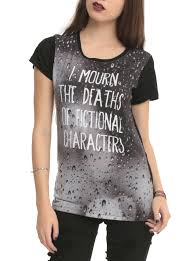 Yes, I own this shirt.

But back to the news, right, that’s what I was talking about.  Because it’s way weirder than any fiction.

I only see news on Facebook since I’m on there chatting with people.  Suffice it to say, it’s an even weirder way to get news since I”m only getting what Facebook considers trending news.  It might be as bad as what Fox News considers trending.  Speaking of Fox, number one trending news item today (I swear I’m not making up the order or anything here):

– Oh, goody.  Is there some way I can just take a sleeping pill and wake up when the election is over?  Cause it’s already getting painful.  By the way, it’s Rand, not Ron his dad, though both are Libertarians disguised as Republicans and as we all know the Libertarian party is best represented by a unicorn, according to my other news source, blogger List of X.  Still, he’s a better choice than Cruz who has a Hispanic name so boo-yah, the Repubs have a ethnic!  Just kidding, he’s white.

– Is it wrong that the first thing I thought of upon reading this headline was – wow, he can swing an ax at 100?  That’s pretty darn impressive.

– Yeah, really, this is what came after the murder-suicide.  I wonder if the wedding will be catered with burgers and fries and officiated by that creepy Burger King mascot.  I would love to go to that wedding.

I’m available for baptisms too!

No word on whether the bobcat is planning on a 2016 presidential run, but he has my vote.

What happens at Denny’s, stays at Denny’s.  Unless you are Marilyn Manson, who may also be planning a 2016 Presidential run.  I wonder if he ordered the Grand Slam?

Okay enough news for today!  Got any good stories of your own?  Or a way out of this BLASTED EDITOR?  Where’s a good bobcat when you need one?