THE ONE WITH THE BILINGUAL DRAGONS

PBS means well – they really do.  Back around 2000, they started making more shows with minority characters, because I guess they felt left out of the wackiness.  Which brings us to my next children’s program: 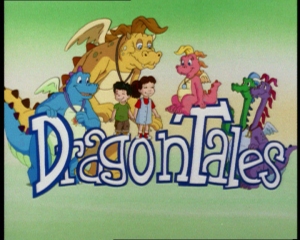 Two kids, Max and Emmy, who look white and speak English like Anglos, yet have a disembodied parent voice with a Mexican accent, find a glowing scale in their playroom.  No, not one you weigh on; it turns out it’s a dragon scale – and it’s magical, of course.  I’m thinking if I saw something strange and glowing in my room, I might get Mom and Dad.  But not these two.  They say some magic words – I guess whoever left the dragon scale left instructions or something, I forget.  Anyway, these magic words  – which are repeated every episode so they can reuse the same animation – transport them to dragon land.

Now I’m a big fantasy fan, and I’ve read a lot about dragons.  They’re big, scaly, and they breathe fire and eat people, especially knights.  They seem oddly fond of kidnapping princesses.  So I’m waiting for these kids to get roasted, but, alas, turns out they’re friendly.  And they can speak Spanish.  No, really!  Who knew?

Anyway, there are several eccentric (read: annoying) dragon characters.  Cassie is the pink one, who shrinks when she’s unhappy and whining, which is pretty much all the time.  Org, or Ord, I was never quite sure, is the token big, stupid one.  And then there’s . . . Zack and Wheezy, the two headed dragon.  They have one body, two heads, yet one’s a boy and one’s a girl and . . . anyway, they also have opposite personalities.  Zack is paranoid, and Wheezy is so obnoxious you want to kill her.  Talk about your therapy issues. 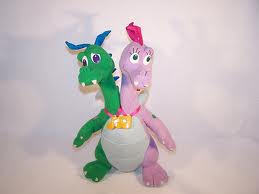 They also have a teacher, Quasimodo, no wait, that’s the hunchback.  At any rate, he’s the typical old, wise teacher, and apparently the only adult Max and Emmy come in contact w/ besides disembodied parent voice.  From time to time there are guest star dragons, like the one in a wheelchair.  Cause his legs don’t work.  In that case, I don’t know why he doesn’t just fly, except that they all have such tiny wings on such huge bodies that I’m not sure how any of them fly.

From what I can tell, Max and Emmy spend most of their time in this dragon place, and their parents never know the difference.  They never say how long the kids are gone, but when my kids got quiet for more than five minutes at a time, it usually meant they were covered in Noxema or something and it was time to check on them.   Either this doesn’t occur to the parents, or they’re just so glad they’re gone that they don’t care.  Maybe they left the dragon scale there on purpose.

I really didn’t like Dragon Tales.  I’m not certain which character was the worst – I guess they all tied for last place.  Where the heck was St. George when I needed him?