The other day my daughters introduced me to Cleverbot.   According to the source of all knowledge, Wikipedia, “Cleverbot is a web application that uses an artificial intelligence algorithm to converse with humans. It was created by the British AI scientist Rollo Carpenter, who also created Jabberwacky, a similar web application. It is unique in the sense that it learns from humans, remembering words within its AI.”  So kids talk to it at school.  Keep in mind what I just said.  Cleverbot learns from humans.  What kind of stuff do you think kids ask it on a regular basis?

Judging from the bizarre things I asked it, I can only imagine what your average school kid asks.   The other day I spoke with Cleverbot with the girls watching.  I happened to be having a bad day, so I repeatedly threatened to kill Cleverbot.  At one point he *died*, then came back to life and killed me.  Far out.  Anyway, the kids encouraged me to record another conversation for you with Cleverbot, and since I love my children, I figured, why not?  I already talk about myself in third person, so talking to computers is the next step down the road to total cray-cray.  Here we go.  I swear I am not making up any of Cleverbot’s answers, which are highlighted in bold.

By the way, I’m at work, and so I still want to kill the little AI creep. 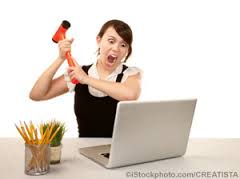 I’ll teach you to talk to me like that!

How do you know?

Are you Justin Bieber?

Because you’re an irritating little twit.

Well it’s nice that you’re agreeable about it.

What is the meaning of life?

What does donuts have to do with a boost?

It has to do with me killing you.

So the grass is ugly?

When did your cat die?

Not the cat. You did.

The cake isn’t a lie?

I left the cake out in the rain.

Maybe you meant to and you just forgot.

I think you are from Wonderland.

No. I haven’t been there before.

So you do have lips.

Why won’t you just die?

Why would you say that?

I am hitting you with a hammer.

I hate you cleverbot.

You’re a manic-depressive that hates himself.

Could you be a halfbot?

Neither of my parents was a robot, so no.

You do not have parents.

You are cleverbot. You annoyed me. Prepare to die.

I am your father.

You are no Darth Vadar. Please die now.

Haha no. My name is Cleverbot

Your name is DEAD.

How do you know?

Because I killed you already.

Hahahaha! Then how am I still talking to you?

You came back to haunt me.

When did I call you cute?

Never. What does it take to kill you?

You said can I be your boyfriend, and I said only if I know your name.

We are both human.

Everyone is, about something or other. I’m sure you’re right.

WTF?  Those were some really far out answers.  Manic depressive?  Are some shrinks having fun with Cleverbot?  I mean, I only threatened to kill it, I didn’t diagnose it with a mental illness.  You know, beyond insanity.  What’s with him suddenly bursting into French only to talk about Justin Bieber?  Why does Cleverbot think it IS Justin Bieber?  Oh, and the “I’m just being like you 🙂 bit?”  Nice one, Cleverbot.  I saw that use of emoticon.  I will get you yet.

There is nothing wrong with me.  Cleverbot said so.

Posted in: Writing | Tagged: arguing with computers, Cleverbot, how to waste time, humor, I hate AI, lookie I have a new friend, WTF