Adventures in the Doctor’s Office

Tuesday Morn.  I drop the kids off and deliriously drive home.  Must wait till 11:15 doctor appointment.  Turn on T.V.  Another TLC gem.  “I Didn’t Know I Was Pregnant.”  Seriously.  Seriously?  How do you not know there is another human in your body?  I don’t care if there aren’t normal signs or whatever we are talking another human being moving around in there.  And how are there enough people this out of touch to make an entire series?  I just . . . I . . . nevermind. 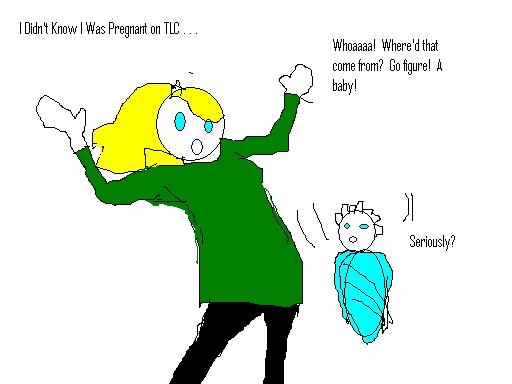 Every woman on this show.

I get to the clinic and wait.  And wait.  The T.V. is on here too, and guess what it’s turned to?  What are all TVs turned to in this area?  Fox News of course.  Joy.  Utter joy.  At the moment, leggy blond reporter is talking to fat bald white guy and another leggy blond about how much Obama has messed up.  Something to do with him not talking to this Israeli guy when he should have been talking to him because good presidents do that and they certainly do not go on the View to talk to “The Women” said condescendingly by “A Woman” who apparently forgot she was one.  I’m thinking they are all irritated that they weren’t invited on a real talk show.  There is much wink-wink, quotation marks, none-to-subtle innuendo, and outright slurs.  Professional News Reporting at its finest.

I am stuck listening to over an hour and a half of that stupid station.  I start feeling low blood sugar (you really have to feed me regularly or watch out) so I ask the receptionist for hard candy.  I get a strawberry sucker that is really quite good, at least when you’re famished.  Finally, I am called in.  Apparently they put me on the schedule, but there are two schedules, and they forgot (shocked) to put me on the one the doctors use, so yeah, I wasn’t on their schedule. Great.   I sit in the exam room.  And sit.  And hack like a dying moose. And sit a little more.

What to do, what to do?  I start to feel like Curious George.  Remember that book where the monkey swallows a puzzle piece so they X-ray him and cut him open (and I bet that monkey was on Medicaid too) and then put him in a room with sick children?  Awesome medical practice there.  Anyway, like George, I have been left on my own and decide to entertain myself.  Turns out they have all these free samples up on the counter.  Popsickle sticks, cotton swabs, gauze, plenty of fun with crafts right there!  But I decide not to take any, because Thing 2 already can come up with enough craft ideas to last most children a lifetime in a single afternoon.

There’s also the blood pressure pump, and the instruments he sticks in your ear and up your nose where he pretends he actually sees stuff beside gross old snot. But that’s about it.  This is a very unexciting doctor’s office.  Clearly I have not packed properly for this journey.  My purse offers nothing interesting, despite weighing about 14 pounds.  But see, last time I went as a walk-in, and got in and out in like half an hour.  This time I have an appointment, and so far I’ve been here six years.  Okay, two and a half hours.  Luckily, I grabbed another sucker before getting shuttled in here, so at least I have that for provisions.

It occurs to me that that survival expert on the Discovery Channel, Bear, would be most disappointed in my survival skills.  (That’s his name.  He’s not an actual bear.  Though that would make it a more interesting show.)  I have no heat, no food and no shelter.  Luckily fever keeps me from freezing in the office, so being a portable heater does have its uses.  If pressed, I could create a very weak pup tent with that anti-germ paper they scroll on the exam table.  But what would you use for a heat source if needed?  I spy an electrical outlet.  Great.  Now I just need a long metal stick and someone dumb enough to poke it.  But still no food.  I’m not sure if I can make any traps, or if I’d want to eat anything I might trap in a doctor’s office.

Then I have another brilliant idea.  Ask the locals.  I peek out and beg for a coke.  And I get one!  And it is so cold it is the most amazing coke ever in the history of the universe.  They also give me part of a package of Ritz crackers.  No idea where those were scavanged from.  Possibly the lunch of my nurse, who is the epitome of awesome, because not only is she competent, she recognizes that her patients are actual humans.  Remarkable, I know.  She also gets her very determined nobody-messes-with-my-patients- face when I tell her that the NP wouldn’t see me twice at the urgent care side of the clinic.  I wonder if someone’s going to get a hand slap?  Hope so!

Okay, I’m getting really bored now.  Hacking until your lower abdomen threatens to split open like a teddy bear slashed in two is only entertaining for so long.  I decide to cast 50 Shades of Grey based on the office staff.  Ana is easy.  There is this receptionist I call ponytail twit girl (because she wears an itty bitty ponytail and she’s a twit).  She rolled her eyes when I informed her that I have arranged something with the nurse already, as if I was saying I knew Elvis personally or something.  Twit.  So perfect Ana right there.

Christian Grey is harder.  Now my doctor is young and nice-looking, and I’m assuming he’s well-off based on my visits alone.  But he’s just too, you know, decent and normal and human.  Finally, I decide to cast the NP that refused to see me that night despite there being no one else in the waiting room, because that sounds like the sort of thing Christian Grey would do.

Bored again.  I drink my coke and eat my crackers.  The doctor comes in and examines me.  You’ll never, never guess, but my lungs sound perfect.  But obviously, I’m sick, because I hack at him and I think maybe I’m making even him nervous.  So I get blood work done.  I happen to be a pro at this because I have this giant vein on the inside of my left arm.  Yeah, I’ve been complimented on it often.  It’s pretty impressive, vein-wise.  She sucks the blood out and wraps some sticky stuff on me and yay I am back in the room again.

The doc decides that my blood says something blah blah virally something blah yeah we’re not totally sure blah.  I told them I needed something better than that for missing a week and a half of work.  Viral Pneumonia is written on my doctor’s note for work, and I’m offered antibiotics and this is the best part!  A shot!  I know, most people are not excited about this, but I know shots work faster.  I didn’t realize it would be a terminator shot, though.  This was one massive shot.  But I got it, they called in my medicines, and at last I was racing out the door, after only four and a half hours!

Maybe not racing.  But I was out at least.  Now I expected to feel better in no time.

Wednesday: Still not better.  I have never been sick so long, ever.  On the plus side, I think I spat up a lot more of the Mucus people today, so maybe their vacation will be over soon, if not mine.  We’ll see what happens tomorrow.

Thursday: Still sick.  I go back to the doctor, you know, that place where everybody knows your name!  At first I’m told there’s nothing for me, but then the doctor clears his schedule just for me and my dying whale bellows.  They decide to do a chest Xray.  Doctor is so surprised! I swallowed a puzzle piece!  Not really, but the doctor is actually giddy, which is kinda strange when speaking of lungs.  He brings me in and points at this black shadow over my lung. I’m assuming I am not dying as if I were, this would be seriously inappropriate.  No, I have a massive pneumonia in the right lung.  And the doctor keeps saying “But you have such great oxygen levels! 96 percent!  How the heck do you have oxygen?  You have some really great reserve systems. I mean, your blood count was normal too but wow, look at that!”  It’s really simple, doc.  My own body is trying to gaslight me.

Well, it’s determined, and after only a week of this crap, that maybe their current treatment plan has not been working all that well.  (This is why they go to medical school, you guyz).  They decide to put me in the hospital, but first I get another test called a CT test, which is super fun because you lay in this flying saucer thing with blinking lights like something out of Star Trek and they take pics of you while the doctor carefully stands outside and says not to worry.

After all of that, my dh drives me to the hospital for the next leg of my exciting adventure.  I’m starting to run out of legs.  Stay tuned next time for: Curious Alice visits the hospital.