Yay, it’s time for another Christmas special with Alice.  Is it that time of year already?  That time when everyone is happy, slappy with joy and the spirit of Macy’s and crap?  Yes, yes it is!  Am I going to ruin this lovely day for you just like I did Halloween and Thanksgiving?  Most likely.  Unless it’s ruined already.  If so, settle on down and let me tell you a story.

The story of Christmas goes like this.  Once upon a time, there was this couple who had to take the census but they lost the form so they had to go all the way across town to get another one.  But they were totally on welfare, see, so all they had was this used donkey that was on its last leg.  Literally, it just had one leg.  Made travel difficult.  Also, the girl, Mary, was preggers, and wanted to stop and pee for the 45th time that night.  Her husband, Joseph, was all “Like, we’re almost there, jeez” but he stopped anyway because you don’t mess with hormones. 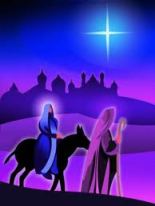 Mary: I have to pee.
Joseph: Again?

They tried to get a room at the inn, but the innkeeper was like, crap, it’s Christmas, like I have any rooms?  (buh-dum-dum!) Then Mary had to go into labor, because babies always pick the most convenient times to be born.  So Joseph, being a man, decided they’d just deliver the baby in that sterile barn over there.  And Mary said, “Are you freaking kidding?” But like, the nearest hospital was like, a long way away and the one-legged donkey was dead so they went to the barn.

Fortunately, there was a cow that happened to be a super good midwife, so Mary managed to deliver the baby with only the usual amount of horrific pain and screaming.  This was a memory she treasured up in her heart, for who wouldn’t want to remember giving birth while a dirty sheep bleated in your ear?  So they had this baby boy, but he wasn’t any ordinary boy, he was the son of God. That’s how the story goes, shut up.  But even being a special baby, the cow still charged them for the lowing and the innkeeper said they had to pay him up front for use of the barn and they didn’t have insurance so they weren’t gonna get to stay much longer.  That’s the breaks.

Did you at least bring us a diaper genie?

Anyway, they named him Jesus, and Joseph like tweeted the news out to the land, and people started showing up with presents and stuff.  There was gold, and incense, and Frankenstein – I’m not sure why he decided to come.  But no one brought baby wipes or Huggies, because that might have actually helped Mary out some.  Some obnoxious kid came with his drum and played until they kicked him out.  And Mary said to Joseph, “We will never buy Jesus a drum.  Ever.”

Then Santa Claus landed his sleigh on the roof of the manger, and Joseph said, “You are not part of this story.”  And Santa said,  “Look, I brought you guys the diaper genie.”  And Mary said Santa was okay with her.  So he got to stay.

Santa was totally there. Shut up.

So anyway, all this happened on Christmas Day, which is why we celebrate Christmas by buying each other lots of expensive, useless crap in remembrance of the Wise Men and Santa and their gifts.  Oh, and Jesus too, because he grew up and did some cool stuff before we were jerks and killed him.  But that’s another story.  I’ll save it and mess up your Easter.

Now that you’ve heard the story, I’ll leave you with this picture of Thing Two’s gingerbread house.  She said, and I quote, “I ran out of licorice for the “Keep Out” sign.  And it looks like a homeless guy’s house.  Best I could do.”

Christmas is tough for gingerbread people.