Okay, time to lighten things up around here.  Especially on my feet.  Cause I’m done talking about jerkwads that fill up cyberspace.  Back to talking about me!  And my feet!  Also my insane obsession with fitbit which led to walking which led to said foot issues.  This is totes going to be more exciting than reading the Dr. Scholl’s website (motto: You be old, here be cushy stuffs).

I mean, it just figures that I would go and try to get healthy and then cause something else to go wrong.  I’m like one of those cars you got a really good deal on because it constantly breaks down.  Speaking of cars, did you know you are supposed to rotate your shoes every six months or 5,000 miles or whatever?  Neither did I.  I’m not sure if it’s true or if the shoe mafia planned this together to make us buy more shoes.

Anyway, I started walking more and it was great because not only was I making myself healthier (I think) I was also releasing lots of Alice rage and anxiety which is a good thing for everybody.  But THEN, then my feet started to hurt.  A LOT.  Thing Two loves giving foot massages with lotion.  I can’t complain; the kid comes cheap.  But it just wasn’t doing the trick.  I was still in pain.

So I figured, hey my shoes are um, let’s see, when did I last buy shoes . . . uh, yeah I should get some new ones.  So I dragged my husband out to the mall where I tried on several different highly priced athletic shoes.

This should be NO problem.

First Lady Footlocker.  I was told I should have my foot measured.  Well I did, and this dude says I wear size 6 even though I’m pretty sure I’ve been an 8 since high school.  As it turns out, he’s wrong, I’m at least an 8.  Also, according to him, I have high arches.  News to me.  Anyway, that was why the shoes did not fit, says he.  I was tempted to buy some socks or something from him (did you know there are specific socks for walking and running?  Me neither!!!) since he worked so hard and got nothing.

We walked down the mall, passing Payless Shoes, and stopped at Hibbetts Sports.  My husband said “Hey, let’s try this one.” because he didn’t at all want to get this over with or anything.  I tried on a few pairs there with Mindy or Cindy or Sarah, whatever.  Her nametag said “Newbie”.  I mentioned back pain and my supposedly high arches and she pulled out some fancy insoles and these heel things that feel like jello (my husband suggested actual jello as a cheaper substitute but I doubt the long term effectiveness).  So we shoved all these things into some shoes.  I found two pairs of shoes that were pretty good.  In the end, the one that was 70 dollars cheaper won out because I’m poor and because I was buying these fancy inserts that were going to make everything better but made the price rise significantly.

I wonder if there are inserts for these. . . I like the subtle look.

So I wore the shoes out and things seemed okay.  My husband was relieved at least.  Then I got home and walked in the shoes some more and realized I was having trouble balancing and the tendons just above my foot now hurt and dang those stupid inserts might be working but they were way too hard.  Considering how much I spent, I was slightly annoyed at this.  I decided to return them.  This was all about shoe comfort, and not at all about cost or buyer’s remorse or the fact that I can’t make a freaking decision.  I thought my husband might beat his head against the tree he was trying to cut down because . . . saws and man and stuff.  But at least he didn’t have to go with me.  What with the tree.

Luckily, the dude at the cash register was willing to take them back without a fuss – he looked like someone who just wanted to get home and play Xbox.  I left and stepped into Payless Shoes.  And woot, found shoes looking almost exactly like the shoes in the last two stores, except I got two freaking pairs for 30 dollars vs . . . the extra amount I spent before.  Score.

Except I still needed insoles because I wanted them a little more cushy.  So I went to Wal-Mart with Thing Two who suggested I try the Dr. Scholl sizer machine because she likes seeing mom balance on one foot.  She was most annoyed it wouldn’t tell her a size.  Probably because she’s ten years old and her weight’s not even registering.  What a problem. 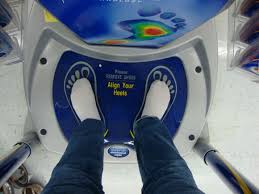 Beam me up, Scholl.

So I found my supposedly custom fit (which said I have normal arches btw), but wtf they were 50 bucks which was more than two pairs of shoes.  Sorry to you Mecca employees, but I was a very bad Alice and opened the sealed box to try on the insoles and they did feel good.  But I wasn’t sure because after all I had not researched this to freaking death yet.  So I put them back and instead got this one for “athletes” (stop laughing) because it had gell all over.  And was 30 bucks cheaper.  It feels okay.  But I wasn’t done yet. 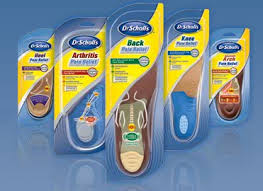 Oh, thank goodness, they’ve got a variety of THESE too.

I looked on Amazon and read reviews about this miracle Dr. Scholl insert thing that is just for your foot (You get like a number- I’m a 310!  I think that means my foot is very smart.) and found that they had the same inserts for 30 bucks.  So I bought them.  I’m not sure how much I have spent, gotten back, and spent again at this point.  And I’m still researching because OMG I am obsessive which is great for my job but not for anything else.

Who knew walking was so much trouble?