Behind the Fairy Tale: Pocahontas

Poooooooocanhontas, where the wind comes whistling down with colorssss!  Sorry about that.  I just can’t say that name without thinking of the musical Oklahoma.  It fits perfectly.  And frankly, Pocahontas starring in a production of  Oklahoma would be about as realistic as the Disney version, and involve a lot more hoe downs.

Okay, so story starts off with hunky Aryan explorer who can never convincingly reserve a hotel room, John Smith.  John Smith is manly, ya’ll, and you can tell by the way he hops on a cannon while singing.  All his crew have man crushes on him, including this one kid, Wesley Crusher I think, who he saves from drowning so he can later shoot Kokopuffs.  Oops, spoiler.

Could I be more awesome?

Next we have dramatic fog and Native American chanting and oh boy are we going to a reservation?  Oh, wait, this is before Our Hero so they are still merrily picking corn and rowing canoes and beating drums and stuff.  Pocahontas, or “Pokey” as I like to call her, is up on top of a cliff ready to jump like 500 feet into the water.  This should be a short story.  But no, she lives and oh we get how she’s like super brave and not at all stupid.  It helps that she’s beautiful (except for a missing nose) and has a great bod.

Next we get Pops, the chief and Pokey’s dad.  Mom’s dead of course, this is Disney.  Dad wants her to marry Kokopuffs (that was his name, right?) but Pokey doesn’t cause he’s like really hot and built and brave but hey, where is his sense of humor huh?  What the heck does her stupid dad expect, I mean jeez.  At least in this one, Dad is not a Weeble.

Pokey is upset about this so she talks to a tree that OMG A FACE!  How did her grandmother get in the Willow Tree?  Holy crap that was weird.  Anyway, she asks her for advice on her dream about a spinning arrow and like all “wise ones” she yammers some nonsense like “listen to your heart.”  Thanks for nothing, grams.

So mostly everything is going okay until the white people get there to screw everything up.  We’re good at that.  On the whitey side is the femmy head of the expedition, Ratface, er Ratcliffe (his actual name).  He has – oh boy, a cute little pug sidekick!  Let’s kick it to the side.  He also has an even girlier lackey who skips about helping him prepare.  This is meant to contrast John, who is like not fancy prancy but All Man.

All Man turns out to mean “suicidal”.  While Ratty immediately starts digging up the land for gold (destroying crap is a great way to make a good first impression), manly man Smith starts leaping around tall mountains and singing.  “The greatest adventure is mine!  Maybe I’ll meet a hot chick!”

While he’s doing this, Pokey is stalking him along with her sidekicks (why, just why) an irritating raccoon and a hummingbird.  Whatever.  Part of the movie is taken up with the pug and the raccoon running around so the kids won’t go to sleep during the romance junk. 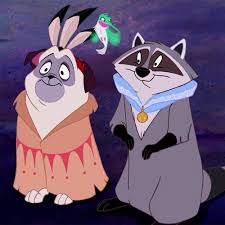 The sidekicks. I hate them.

So John hears her and he gets his gun and then Pokey walks out of this fog in this awesome model pose and John’s all whoa I really wanna – get to know her.  But, oh no, they don’t speak the same language.  How will they . . . oh, right, they stand close and leaves blow around them and BANG automatic universal translator.  Convenient.

John calls her a “savage” (oh wait, I only meant your non-hot people!) so Pokey schools him by dragging him all over the wilderness while singing about blue corn moons and painting mountains and wind colors and I think maybe the Native Americans were growing more than corn.  She clearly has some sort of leaf blower power, cause leaves are always swirling around her body and in her Pert Plus hair.

She is really into those leaves.

Meanwhile Pokey’s dad sends some scouts to check out the new guys, and one of them gets shot and he gets this wild idea that these peeps might be dangerous.   He calls some of his friends over for backup.

John tells Ratty that there’s no gold so naturally he figures the Indians are hidin’ it and they should kill them all!  Perfectly logical plan there.

Let’s go to war! Cause war!

But that won’t stop our lovebirds!  Pokey gets caught by her pal, but hey, what’s the threat of war when you’re in luss . . . love!  John sneaks out too, and is followed by Wesley the brat he saved earlier.  John and Pokey make out, but turns out Pokey’s pal ratted her out and oh oh Kokopuffs is pissed, and tries to put a tomahawk in John’s skull but Wesley shoots him dead.  Whoops.  I never saw this coming, did you?

John is captured and waits execution while Ratty gets his men together to rescue John and retrieve the weapons of mass des- the gold.  Pokey is still confused, so she wastes time yammering to the willow tree before figuring out that she should maybe stop this.  At the last second, she flings herself over John, stopping the club.  She reasons with her Dad, who is suddenly like oh, okay, let’s all stop fighting and stuff, what was I thinking?

WTF with all these leaves?

But too late cause Ratty tries to shoot him.  John plays the hero and takes the bullet (omg he is so manly).  The settlers turn on Ratty, but there’s no happy ending for John and Pokey cause John has to be taken home to be treated (the natives can’t pull out a bullet?) and Pokey must stay to keep peace (yeah that’s gonna work).  They make out in front of Dad a bit then John sails away while Pokey shoots some leaves his way in goodbye.  Aw.

Now for the  “behind the fairy tale”.  If you think Disney goofed up fairy tales, that ain’t nothin’ compared to what they do to actual historical figures.  The real Pocahontas was roughly eleven when she met  the twenty-eight year old John Smith.  You can clearly see the romance potential here, but no, they were just friends, sorry Lolita fans.

John Smith (who was an explorer but hairier and not quite as hunky) did write that she saved his life when they were about to smack him in the head with a rock.  Others say he had a tendency to brag about women saving his life (totally macho there) and that possibly he misunderstood and this was really just a ritual, not an execution.  Either way a large blunt object was involved, so I’m not sure if it matters all that much.  At least it didn’t to John.

I can see where Disney got their inspiration!

Disney does include several of the real people – well their names anyway, the actual setting, Jamestown, and the famous rock incident which was probably true.  They leave out the part where she later is kidnapped by the English she’d been feeding and held for ransom but Daddy didn’t want to give up his guns so she got to get all Christianized and married to an Englishman and her name changed to Rebecca and entire culture obliterated for a new one, oh and also how she was dragged to England to be paraded around like a monkey before catching smallpox and dying at about 21.  Fun stuff.  I can’t believe Disney left this out.

Stay tuned next time when Disney decides to lighten things up with The Hunchback of Notre Dame!