Good news!  Santa decided to settle out of court.  Rudolf has been safely returned so that he can fulfill his duties dragging Santa’s butt all over the freaking planet.  Lucky Rudolf.  And lucky Alice, for she has started getting presents from years past!  Today I got a My Little Pony from the 1980s.  You know, back when the ponies at least sort of resembled real ponies, if said ponies were purple with flowers on their butts.

Santa wasn’t the only one giving gifts.  Alice was also awarded a brand new award by thelesbiannextdoor.  It is top notch stuff, you guyz.  Check it out. 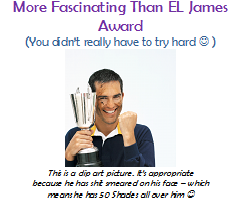 I have the best friends ever.

I am supposed to list 2 or 5 or 10 fascinating facts about myself.  Prepare to be fascinated, folks.  Unless I’ve told you this already.  Then pretend.

1. Alice has multiple degrees.  No really.   She has a BA in English, an MA in English, and an MLS (which means  the queen of libraries or something).  Irritatingly enough, these degrees do not add up to one PHD.  And so far, no one has called her Master.  Irritating.

2. Somehow these degrees also didn’t get Alice a fabulous high-paying job.  Even though she spent years making up crap about Moby Dick.  Life is not fair.

Oh yeah, and I’m supposed to come up with my own award.  I guess it is Christmas, so I should give you something.  Close your eyes.  Keep them closed.  You’ll be much happier.

There’s plenty for everybody!

I told you to keep them closed.  Okay, look, I’m hoping for Photoshop for Christmas, because my paint program sucks.  You’ll have to accept the Christmas freaking spirit instead.  Don’t spend it all in one place.

Finally, Alice announces that she is taking a Christmas vacation.  She’s not going anywhere (of course), but she is taking a break from blogging.  For realz this time.  This is my Christmas present to myself (and probably to you as well).  Happy Freaking Holidays, whichever ones you are lucky enough to celebrate!

A letter to Santa from his attorney

Today I am proud to announce my very first guest blogger, Ravin from Ravin’s Rantings.  Ravin has been my friend since I was just a 12 year old slightly deranged person.  We are a tad older now, but she is still here – and now on my blog!  Her firm is representing Santa, but it doesn’t look good for him, you guyz.  Check it out:

I was alarmed and saddened to hear of the recent situation you face with Alice. We here at Elf Law are of course at your service. I must, however, advise you to settle out with Alice, for several reasons.

First, a lawsuit would not go well. The bad publicity would threaten your endorsement contracts with Coca-Cola and retailers.

Secondly, while I am aware that you have declared the North Pole a sovereign nation and yourself Absolute Dictator for Immortal Life, Russia and Norway would likely dispute your claim. Further, the North Pole Code took over five hundred years to develop in its modern form through careful negotiation between you and the native population of Elves. You already have a dubious track record with indigenous people:

If word of the nuclear power plant violation of the North Pole Code got out, The Elves Local #1 would strike, and force you to source new workers and move your workshop off-planet. Child labor trafficking isn’t as cheap as it was in the 50′s, Santa. You really don’t want to go there. You already have a criminal record, need I remind you?

I think it is also pertinent to remind you what happened the last time you allowed a feud with a mortal to escalate.

And it is no shock that Rudolph ran away. It’s entirely possible Rudolph is in cahoots with this Alice person.

Remember, he’s done it before.

In conclusion, the next time you have a dispute with a mortal, I suggest you call our office immediately, before taking actions that may be grounds for an emotional distress tort claim. Unfriending her and unfollowing her were reasonable decisions. Taunting and provoking a clearly unstable person by mentioning that you had done so may have gone beyond the bounds.

Had you simply cross-referenced her against our records, you would have found that you were under no obligation to respond to her letter or deliver anything to her, as your contract requires only delivery to minor children and she is an adult, pinafore notwithstanding. Additionally, Wonderland is outside our delivery area because of the undue hazard of entering the jurisdiction of the Red Queen and the relative lack of mortal children there.

However, given the mess you have made of the situation, taking her offer of an exchange in an alternative delivery location would be the prudent action at this time.