I originally started this blog because I felt my life was much like Alice’s.  I never knew whether I was coming or going and nothing ever made sense.  Such is life.  But add a few chemicals to the mix and boy do you get fun, fun, fun!   Soon you are chasing a rabbit down a hole.  Or is it chasing you?

And if you go chasing rabbits
And you know you’re going to fall
Tell ’em a hookah smoking caterpillar
Has given you the call
To call Alice, when she was just small

I have been on antidepressants since I was a teenager.  I once tried to get off of them and decided, bad idea.  People have all sorts of opinions on this subject, but I’m not arguing that.  I’m just talking about what’s happening with me, cause that’s what I care about, me.  So anyway, if you’ve been reading, I have been going through some medication changes that have affected me just a tad.

When the men on the chessboard get up
And tell you where to go
And you’ve just had some kind of mushroom
And your mind is moving low
Go ask Alice, I think she’ll know

I was put on abilify to help with the other two, and then I was taken off of that cause weight, and then I was put on this one called cytomel (they all sound like alien planets) and then off of that, and then back on that, and just now I had a new shrink tell me that I should go back ON abilify because hey the weight gain will plateau.  Or something.  He had a thick accent, so I’m not entirely sure what he said.  At this point, all doctors sound like these guys to me.

I think I’m the dormouse in this one.

This was the on-call doctor after hours, who told me to tell my shrink that I should like, be on this pill.  But now I can’t remember why I got on the first pill to begin with – lack of energy?  Feeling all mixed up?  Wait, that’s how I feel now.  And the whole “it won’t be that bad, trust us” is a load of crap.  I’m starting not to trust these people.  Is it really paranoia if you’re dealing with shrinks who apparently must be nuts themselves in order to get a license?  I don’t think so.

When logic and proportion have fallen sloppy dead
And the white knight is talking backwards
And the red queen’s off with her head
Remember what the dormouse said
Feed your head,
Feed your head

The song I’ve been quoting from is called “White Rabbit” by Jefferson Airplane.  It is totally trippy, man, even more so if you listen to it and watch this here far out video.  I don’t know why this lady is running on the beach.  Maybe she had some of the LSD they are talkin’ about in the song.

(Note: I first inserted the video, and it whacked out my formatting because WP thought it’d be amusing to mess with me on a post about being messed up.  Good play, WP.  I finally got it to work after much trial, error, and cursing.)

You’re begging me for Billy Ocean now, aren’t ya?

But I do think this song has truth to it, even though I’m not on any “fun” drugs like the guys writing the song most likely were.  Logic and proportion have fallen, and the white knight, the doctors in those nice coats, are talking backwards.  The red queen could be my outside stress – sick kids, sick me, work, home, marriage, yaddah yaddah – which causes a constant “off with your head” feeling to go through my body.  And they want to keep feeding my head.

Gee, let’s try this one.

I’m tired of it.  I asked Alice, seeing as how that’s me, and she said let’s just call “time out” for a bit here, mmkay?  Stop feeding my head.  Let it rest.  I am not sure what the right path is now, but I know one thing.  I’m not blindly following any more rabbits, not without some information.  What kind of drug is this?  How does it affect me?  What should I watch out for?  Is there anything else I can do besides just go on another medicine?

My shrink does not want to discuss anything with me, cause he’s a jerk full of inflated self-importance.  I want, and deserve, someone who will work with me and I’m going to get it, somehow.  There are some possibilities right now.  I could see his nurse for the most part, and just check in with him once a year.  Like many nurses, she knows more about what she’s talking about than the doctor.  Or I might find another shrink somewhere.  I don’t know.  But I’m not letting him mess me around anymore.  I might not have a doctor’s degree, but I’m not stupid. 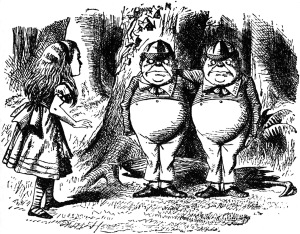 This is my body, and my mind, and I only have one.  If things go bad, it’s on me, not them.  I’m the one who pays for it, with missed work, or messed up relationships, or spending more on bigger clothes, all things that are not listed in the official list of side effects.  I am invested in this.  I am my own advocate.  I must be – even when I’m small, which I am right now.  I’m scared, and I’m not sure what’s going to happen.  I’m not sure what I’m doing is right.

In the end, though, there’s just one person who can decide.  Have a question?  Go ask Alice.

all pictures from Lenny’s Alice in Wonderland site