Tag Archives: Much ado about nothing

Boxing Day and Other Randomness

Once again, WordPress, I do not want to learn about your new editor, and you can’t make me.  Not until you take away the old one, like when the librarians took away the physical card catalog and I had to use the computer one.

Yes, there were physical card catalogs, shut up.

So I sort of missed telling anyone about what to buy for Christmas, and I’m super sorry because I know you were all bereft without my helpful shopping lists.  I like the word “bereft”.  I also missed Christmas day, but then I have had other Christmas specials if you want to check them out.  Come on, you have nothing better to do but work and I know you’re on WordPress right now.

You could have bought this great gift from my list! Girls go crazy for the Swiffer!

My best gift this Christmas was Tramadol.  I contracted another sinus infection (I can get them from pure air I think) and my head was going to explode and I told the doctor that regular Tylenol and Ibuprofen had not helped so could he give me a shot of the good pain stuff? The doctor asked why I didn’t just take regular pain meds?  Yeah, he did.  Then he looked at ME like I was your average druggie.  I am not average, you jerk.  He gave me the shot.  I felt so much better.  Thanks, Tramadol!

I even missed Boxing Day!  It’s a real holiday for the UK and Canada and I’m not sure who else.  Maybe UPS. I was just thinking about boxing day because my highly cultured 14-year-old brought it up, since she is in debate and thus reads way too much about politics, other cultures, and critical thinking skills. She once wore a shirt with a UK flag to a 4th of July celebration, and no one noticed. Question: Do you guys celebrate independence from us Yanks?

I’m getting this out early to all you Brits out there!

Also I found a snotty article in the New York Times about what Boxing Day is in America – hint: she’s snotty about how dumb we Americans are. I mean sure, we are, but like I need this chick to say it. I’m pretty sure she’s not British cause I didn’t see any extra “u’s in there or anything.  She said in the UK you guys give out canned goods and stuff to people right after Christmas (like how much charity to you NEED, sheesh), but that we Americans just stare glassy-eyed at our empty Christmas-present boxes.  My family did NOT, Ms. New York Times, we stared at our our still full Christmas bags.  They are festive and much easier than all that wrapping crap that my aunt insists on continuing to do, with ribbon so tight you have to saw it off with a knife.

The bags are still full because we haven’t figured out where to put the stuff away yet.  I know, first world problems right?  Where to put that pregnant mermaid ornament (an earlier gift from the same aunt)?  As far as cardboard boxes, I do have a lot of those because I shopped from Amazon this Christmas.  It is my hope that my small contribution will help them take over the world of merchandise, if Disney does not get there first.  I should also point out I shopped too much from the Disney store so . . . healthy competition, guys. 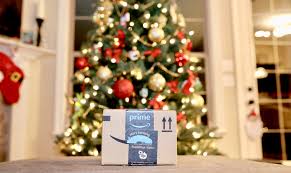 You don’t even have to wrap them!

I did get a new computer since the one I’ve had for many years, which was a gift from a friend who had it for years before that, was conserving its last breaths of life by repeatedly turning itself off at random times.  My husband bought my new-to-me (refurbished!) computer with money from his extra job guarding the media gate (with his mere presence!) during the first half of the fall football games.  I think I’ll keep him, especially since in two days we will have been married for twenty years.  It seems just yesterday I was the 22-year-old clueless, glassy-eyed newlywed staring into the camera with no idea what I was doing.  I mean, I still don’t, but I’ve gotten better at hiding it.

Anyway, a new computer meant that I had to remember my old passwords which are usually saved on my computer because I can’t remember them.  I kept mashing the same words in, since I really thought I knew them this time, only to realize that I was trying to get into wordpress.org instead of wordpress.com.  I didn’t know there was a difference.  Once I got on the right one, wallah, I did get into my own blog and there I found a list of blogs to read, and one of those was anupturned soul’s, and guess what she was talking about?  Boxing day!  And she’s like certified British!

I think we may be Time Life books connected sisters, anupturned soul (can I call you soul?  Up?  Got a nickname?) because I also like Dr. Who, or I did before this latest one and I totally got your reference to Amy Pond. I think she is one of the best companions and I felt very sad when her baby melted.  For those who don’t watch, you had to be there. Thank you for your childhood definition of Boxing Day “. . . a day when everyone put on boxing gloves and punched each other openly, freely, without legal repercussions.”  I can get behind this holiday.  Like the Purge, only friendlier and not quite as bloody.

I do still plan on finishing my review of Mary Poppins. I am currently reading her second book, Mary Poppins Returns (also a new movie go watch now says Disney counting their money bwahahaha!) and the kids are still going on adventures and Mary Poppins is still being a jerk, so business as usual.  I haven’t seen Mary Poppins Returns yet, but I did watch Saving Mr. Banks, a movie about the author of Mary Poppins, P.L. Travers, and Walt Disney, who tried to get the rights to those blasted books for about as long as I’ve been married.  Also I saw Before the Mouse, a movie about Walt Disney’s early years and struggles to get started with animation.  Say what you will about him, but Walt Disney was freaking determined.  He also made his fortune without a “small loan of a million (or 600 million give or take) dollars”.

So now that you’re all caught up with me, what’s up with you guys?  Guys?