Tag Archives: My eldest just turned 14 so I could totally be 29 if I had her in 9th grade

Fitbit is a Cruel Master

Yesterday was my birthday for all of you who forgot to send me a present.  (I’m looking at all of you).  I did get some nice birthday messages on facebook, which were way better than the clever one I got several times “Oh, so you’re turning 29 right? It’s funny, cause we all know you’re actually way older, wink wink!”  I hate these people.

Fortunately, I did receive gifts.  Like the gift of way too much food making me want to throw up, a comfy pillow, breakfast in bed by Thing Two (2 burned pieces of cinnamon toast, an overflowing cup of chocolate milk, and about 10 pieces of precooked turkey bacon), and finally the gift I gave myself because yea, I am a masochist.

I got a Fitbit.

What is a Fitbit?  I didn’t know either until recently.  I owe it all to David Sedaris, and to blogger Nicki Daniels, who posted his article on Facebook.  He wrote an amusing article about this silly little device, a pedometer you wear on your wrist that measures all sorts of crap, like every step you take, every move you make, etc.  And then it puts it all into this chart on your computer or phone.  On this same site you can also tell it what wretched things you ate (be honest, the scale is evil, and never lies) and find out how many calories you took in and whether that will in any way be offset by the calories you burned (it won’t).  On the plus side, I did figure out I burn a certain number of calories by breathing, so there’s that. 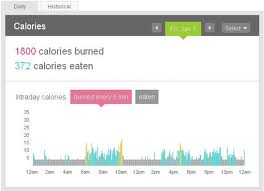 Charts! Oooh pretty! And yes, I always walk that much after consuming a few Saltine crackers.

I hesitated getting one, cause it costs 99 bucks (Thing Two saw it and promptly announced that she knew how much it cost from the Target ad.  Smart little brat), but then I figured so do bracelets and this one has doohickeys on it and is totally going to make me thin and healthy and crap.  Totally worth it.  Also, did I mention the pretty charts and graphs?  The reviews were all over the board, from this is so wonderful to I lost it the first day cause the clasp sucks.  Never fear, there is an answer to this.   It’s called a Bitbelt, and it’s this little plastic thingy that holds your band on.  There’s nothing to it, and I guess I could have just used a crude rubber band, but this is cute and hey you are helping a business that is not the evil Empire of Amazon where I do most of my shopping, er, I mean that I protest daily. 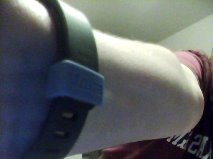 See my tiny little Bitbelt? It holds on the expensive Fitbit. You should buy one, even if you don’t own a Fitbit. This is totally not an endorsement in hopes of getting more free stuff.

I have to admit, I’m kind of addicted.  I walked like mad the first day, cause I really, really wanted it to vibrate.  Get your mind out the gutter, it’s on my wrist.  Anyway, it’s neat when you meet your goal cause then Fitbit likes you and gives you badges and wants to be your friend.  But if you fail, it’s all like that little punk girl on Candy Crush who cries cause you didn’t meet your goal.  There isn’t a little girl really, I just imagine it that way. 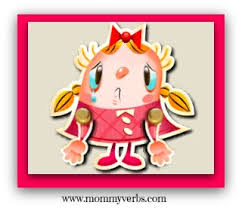 Alice, you have failed me.

As David points out in his article, this is the perfect device for neurotic, obsessive people who need to lose weight.  Bin-go!  You found a winner here!  Yes, sometimes I lose my obsessions, but I’ll have you know that I still have all my yoga equipment and sometimes I still do poses.  Mostly the ones lying down.  In bed.  But STILL.

Speaking of Yoga, just a while back the creator of YogAlign, whose product I kind of sort of poked fun at, found my blog post and offered to send me her 60 dollar book and DVD for free.  WOOT.  Seriously, I am most appreciative.  It is a pretty impressive book, though I haven’t read it all.  I linked to her website if you wanna check it out.  She talks about how some of the poses you do in yoga can sort of crush your spine and I’m more than willing to redo those poses (stuff like sit down and touch your toes) cause I hated those poses anyway.  Thing Two and I tried out her DVD, but I believe it is for advanced yogis, cause in one move she does this scissor thing where her foot meets her forehead and while that doesn’t compress the spine, I’m not sure how her leg failed to pop off.  Thing Two kept yelling “LADY!” through most of the video.  But the good news is that she is planning to offer a beginner’s version.  Excellent idea. 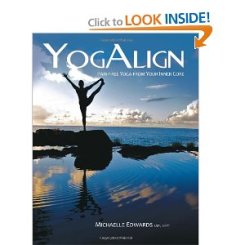 Michelle Edwards sent this to me to enlighten me. Thanks, Michelle!

THIS lady did not send me her balls. Insert candy crush sad face.

But back to Fitbit.  This silly little device really IS making me walk more, and I have hopes that it will help take off these extra pounds because there’s a lot of Diabetes in my family, and I hear that sucks.  Also I don’t want to keep buying pants.  If only all cake could disappear.  I’m pretty sure cake is in cahoots with the scale as both are obviously designed by the Devil who also created Yoga.

But yesterday was my birthday.  Fitbit stayed off my wrist.  Bound and gagged it could not see all the food I shoveled in my mouth or the number of naps I took.  Haha!  I showed that tiny electronic device!  But tomorrow I will strap it back on again, because I’m neurotic and obsessive and at least this will be a more positive obsession than say, dating my car or eating baby powder.

A better picture of Fitbit. See its diabolical brain highlighted.

Any of you guys have a Fitbit or similar device?  What do you do to work out?  Does it involve being chased by wild wolverines?  Let me know in the comments below.

Posted in: Health, Reviews | Tagged: Bitbelt, David Sedaris, Fitbit, Fitbit Flex, fitness trackers, humor, masochism, My eldest just turned 14 so I could totally be 29 if I had her in 9th grade, yogAlign

©Alice and aliceatwonderland.wordpress.com, [2011-]. Unauthorized use and/or duplication of this material without express and written permission from this blog’s author and/or owner is strictly prohibited and may be punished by removal of head by Her Majesty, the Queen of Hearts. Excerpts and links may be used, provided that full and clear credit is given to Alice and aliceatwonderland.wordpress.com with appropriate and specific direction to the original content.
Loading Comments...
Comment
×