Yup, I’m seventeen.  Well maturity wise.  Well, actually more like thirteen, but we’ll bump it up to seventeen for the heck of it.  Just yesterday I saw a post by the awesome Becky about turning 29 and feeling old.  Beck, I don’t remember 29.  I think the last thing I remember was turning 24, right after my first daughter was born, and then BAM suddenly I’m 37.  I have no idea how that happened.

Anyway, I also happened to see a post by Sarah, formerly Combat Girl, who took a quiz from Seventeen magazine to find out what sort of feminist she was.  Well, I was all up in that, cause I love taking quizzes, especially somewhat pointless ones.  So I took it, and, shock, I’m a liberal feminist.  I know, your jaws are on the freaking floor, amiright? 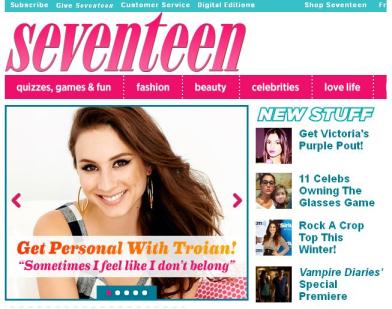 Who is this girl on the cover? And who named her?

But, you guys, there were more quizzes, and they were about very important topics.  Like, not just what dress do I want to wear to prom, but what perfume should go along with it?  Crap, I had no idea there were so many decisions.  Yes, I realize I am not seventeen and so this is not supposed to concern me, but honestly, I wasn’t a very good teenager.  While I did pick out a prom dress, I didn’t take a quiz to find out – I sort of tried it on. And I didn’t once think about wearing perfume, because it makes me cough.

But there are other topics, don’t worry.  There are Twilight quizzes, vampire quizzes, “does he like me” quizzes, boyfriend quizzes, love tests, quizzes about love, and quizzes for girls.  Like, um, what guy is reading seventeen magazine?  Come to think of it, what girl is?  Apparently me.  So I took some of the quizzes, because otherwise I’d have to do something, like, productive.

What earth shattering revelations will I discover?

I wasn’t for sure what the difference was between vampire quizzes and Twilight quizzes since, Zomg, Edward is the only vampire and he is so sparkly!  And I was right.  When I selected “vampire quizzes”, they were all about Twilight. Go figure.  So I took one.

Quiz: Are You Team Edward or Team Jacob? (Take this quiz to find out which supernatural Twilight  man is right for you!)

How about neither?  Okay, here are the questions.  Some of the multiple choice answers were condensed by yours truly.

My answer: Depends.  Are we talking about keeping a vampire secret?  Because I’m pretty sure I’d out Edward and put his disco ball butt right out in the sunshine.

2. Do you believe in love at first sight?

a. Maybe, when you find the right person it will be forever!

b. Absolutely!  Some things are meant to be!

Now I didn’t change the wording in those answers that much.  The choices really are between maybe and absolutely, even though the maybe even seems to also be a yes.  So – yes or yes, girls?

The quiz goes on to ask what my personality flaw is.  I’m thinking the fact that I actually read these books, but I have a choice between not taking myself seriously, and not being myself.  Again, aren’t both of those pretty close to the same thing?  I’m starting to get suspicious.

Next it’s do you take risks, how do you act when you’re angry (if I act like a jerk, I’m perfect for either of them), and when making decisions am I guided by emotion or logic?  Strike out for logic, there wasn’t any in the book.  I’m not sure which guy is supposed to be the logical one here.  Anyway, I randomly put in answers and got Team Jacob.  Woot.

I figured I’d move on to real life boyfriends, or as real as they get in high school (think Gucci purse to match your pumps), so I chose “Boyfriend  Quizzes”.  Wow, so many to choose from.  Am I too close to him, too far away, should I dump him, should we make out, should I just go read a book and forget about guys for a while – okay I made that last one up.  I then checked out “Love Quizzes”, which had boyfriend quizzes.  Then I looked up “Quizzes for Girls”, and – surprise – more stuff about boyfriends.  So – teens have no other issues?  Good to know!

Of course, some of this stuff made me feel even more ancient.  Like, I know a lot of the shorthand, like OMG, and FYI and especially WTF.  But explain to me this sentence.

It’s a quiz, peeps, and I don’t even understand what the quiz is asking.  I certainly don’ t know the answer.  This really IS just like high school.  But what the heck.  I clicked on it, and it turns out 1D is shorthand for  One Direction, the boy group no one gives a crap about, not even a lot teen girls.  Seventeen says:

You already know your 1D love match, but you have to admit, the guys also seem like they’d be fun friends. Which member would you mesh most with? Take the quiz to find out whether Zayn, Liam, Louis, Niall, or Harry would be your best guy friend.

Oh, so I get it.  BGF is “best guy friend”.  I thought it was “big groovy ferret.”  I think I’d prefer that.  But gosh, how will I know whether Zayn, Liam, Louis, Niall, or Harry will be the pal for me?  I think I can mark off Zayn right away because, seriously, that is not the way you spell Zane.  And Niall – I have no idea if that’s spelled right, because I have never heard of it before.  So I was down to three before I started the quiz, but then they asked if you liked the “classic” Thriller, and they just lost me right there.  I don’t think I’m going to date a boy band.

So, honey, do you think this fits my personality?

I have to say, after researching this fascinating magazine, I feel older, but I really don’t care.  You could not pay me to go back to seventeen.  Now the body and health of one, sure, but not actually going back there.  I’m actually fairly happy where I am right now.

But maybe I should take a quiz to make sure.