Pokemon, Smart Phones, and the Rime of the Ancient Librarian

I think I mentioned before that I was one of the last hold outs on the whole “smart phone” thing.  I have a cell phone, but it just makes calls and texts.  The fact that I can text puts me above, say, my parents, but that’s about it.  Otherwise I am left in the dust.  Get out of the way, you stupid cars, my buggy has just as much right to be here as you do.

It’s strange to think that it wasn’t all that long ago (for someone who is like farthead 40) that we didn’t even have the things.  Can you remember what that was like?  I can.  It was such a total pain.  Like you had to go inside a building, or to a phone booth, and call someone if you needed something.  I’m pretty sure even homeless people have smart phones at this point, and they are only on the street corner to catch a Pokemon*.  But not me.  I didn’t even get my “dumb phone” until I was pregnant with crazy baby (Thing Two) .  I was at a point where it would not have been at all odd for me to suddenly burst into flames and have the doctors call it “just another wacky pregnancy thing”.  So I wanted a phone in case of baby emergency, and we weren’t even close to labor yet.

I think most people started that way.  I need a phone for emergencies.  Also to talk to my mom.  And keep tabs on my boyfriend.  And crush candy and pretend farm and catch imaginary monsters.  It’s IMPORTANT.  Heck with you, Superman, who now has to run inside a J.C. Penny’s to change thanks to us getting rid of the phone booths; we need our phones.  Why?  Because everyone else needs them, and the world goes along with everyone else.  It’s like everyone else is on cocaine, and I better get drugs fast, or I am never gonna fit into this world at all.

Are they even called smart phones anymore?  This is how out of touch I am.

Wait.  This is exactly what happened in Wonderland – you gotta be stoned to fit in.  Well, I guess we crossed that bridge with the presidential election a long time ago, so whatever.  My kids are some of the last kids not to have smart phones.  What is a good age to get a kid one of these phones?  I’ve seen toddlers with them, because you never know when little Jaxxon will need to make an urgent phone call.  “Juuuuice!” is something I so often hear them scream into their phones.  Or text with their pudgy fingers.  But seriously, no, it’s the educational games on the phones they like.  Because “Peek-a-Boo” takes up way too much time, and uses your hands, and now our wrists hurt from carpal tunnel.  But please give it back because Mommy has stuff to do.  Her crops are wilting, her boss has more Pokemon power-ups than she does, and Daddy is not going to stalk himself. 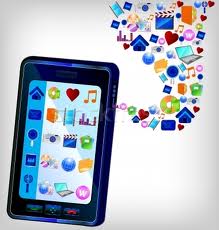 Crap I just lost all my data! Darn kids.

I don’t know what a Pokemon power-up is and I don’t want to know.

What’s this about stalking?  Oh, that’s a fun thing I learned from a 20-something co-worker a while back.  “See,” she said happily.  “I can tell where everyone I know is right now.  Here is my boyfriend at work.  Here’s mom at the grocery store.  Here’s all 72 of my best friends at the mall.”  I found this a little disconcerting.  “What if you don’t want someone to know where you are 24/7?” I asked.  She looked at me with a face that clearly did not comprehend the question.  Of COURSE you would want to know where everyone was all the time.  I told my husband about this feature.  He said if we ever get smart phones, he is tossing his in a truck going cross country.  I don’t blame him.

Yet I can only hold out so much longer because the world changes to fit our technology.  My kids are actually expected to have it and bring it to school for “Share your technology day” where they use their own expensive electronic devices instead of the school supplying them, and if these devices should be lost or stolen, the school is in no way responsible please sign here.

It’s not just phones, though, it’s technology period that is going haywire (pun intended).  Phones are just mini computers now, even smaller than the NUC on my desk.  That’s NUC not Nuke, though it certainly sounds like I have a rather dangerous bomb on my desk, but believe me it’s not even half as useful.  See at work they took away our computer towers and gave us these tiny boxes that have like one whole usb port in them for you to plug your stuff in, which certainly beats the towers which had a CD drive, several usb ports, and acted as a nice shelf for my office mate and me.  We were not impressed with these new boxes.  Yeah, they were smaller, but with one port you had to get another thingy to plug into it that is a square thing with 4 ports on in, so you can actually plug more than one thing in it at a time.  If you want me to explain what a usb port is, you are worse off than I am, but not by much.  All I know is it’s like an outlet.  I’m not even totally versed on how electricity works, except that you plug something in and ‘bing’ a light comes on.  It could be fairies coming through the wires for all I know (or care).

We no longer have monitors this large, but we are still just as stoned as these kids.

I don’t adjust well to new things, especially technology.  I refused to learn that wild mp3 thing until my husband bought one for me and showed me how and then I really liked this little thing I could store my music on.  Except now mp3 players, like the Sony Walkman cassettes and CDs, are so old that my snobby computer refuses to recognize the software. Seriously, it just totally ignores it, like, you are so not worth my time.  Why?  Because you can get that on your phone.  Along with a camera, a GPS, a best friend (hi Siri), and God only knows what else.  Why do my devices have to multitask?  I don’t expect my dryer to also take selfies and cook me a mean pot roast.  It dries clothes. That’s it.  But the computer at your fingertips does everything.  You can pay bills on the phone.  You can also check out books.

It should be known that I did not start using the library computer catalog until they removed the physical card catalog – the one with all the cards in it.  And I was one of them “Youngins” then. 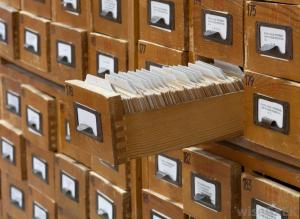 If you don’t remember what this is, I hate you.

Yet you have to eventually give in just to keep up in this world.  I don’t want to be the only one not getting mugged in alleys or falling off cliffs while chasing pretend monsters.  So I guess I’ll have to get the smart phone.  And update my computer.  You know.  Eventually.

When they take away my pay-by-the-month dumb phone, most likely.

*I so did not use Pokemon in the title just to get more hits.  Okay, I did.