Disclaimer: No dolls were bought during the making this post

Last time on the Princesses of Disneyland County, the Disney princes were left to babysit the children at Kristoff and Anna Kristoferson’s house.  Unfortunately, the game was on, so like how were they supposed to pay attention?  Football, people, priorities.  Also, these are princes.  They aren’t used to actual work. (Click to enlarge photos)

The ladies came home to a bunch of crying kids and a big mess.  But neither princes nor princesses wanted to deal with that fallout, so the kids were left again by the couples, this time with a babysitter, Skipper Charming.  But Skipper was happier babysitting her boyfriend, Troy Beast, so the kids got a little rowdy yet again, jumping in the baby’s crib, digging in the trash, climbing in the oven, you know, the usual.

So what happened?  Well, the Kristofersons want responsible kids, so they told the kids and their friends to clean up and left a babysitter, Skipper again because no one else volunteered, in charge.  Skipper had broken up with boyfriend Troy, so surely stuff wouldn’t go quite so badly this time.

If you’ll notice in the picture, we’ve got Sven Kristoferson spraying his brother with the Windex as Izzy Beast cheers him on, and his sister digs Mommy’s cell phone out of her purse.  Mulan’s daughter practices her headstand, Windy White vacuums up everything, including Kelly Charming who takes a nap in the dust pan, while Rosie Prince plays in the trash and the puppy pees on the floor.  Oh, and no one watches the baby, though at least she’s in her crib observing the chaos this time.

Also, is that Cinderella’s shoe in the sink?  She can’t keep up with that thing, can she?

Anyway, it’s almost like you have to WATCH your children to get them to do anything right.  But hey, someone was supposed to be watching them.  Skipper Charming!  Where did that girl go?  Why not check downstairs? 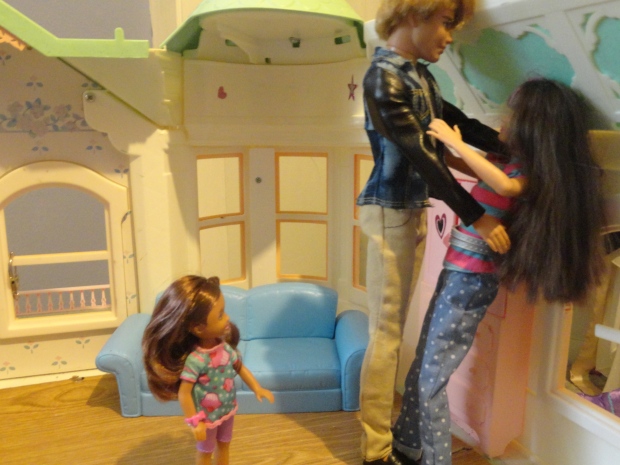 Looks like Skipper’s found a new hobby and little Tamika Frogg is learning the ropes.

Kristoff gives him a proper goodbye while Anna scolds Skipper.  They should be about as effective as her parents are. 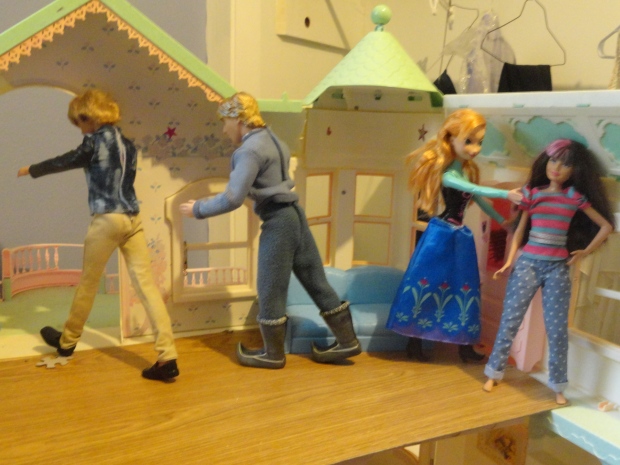 Hey, kid, met the antlers of my reindeer yet?

So all’s well that ends well . . . no wait, that ended terribly, forget it.  In case you wondered, yes we have made almost all of the dolls have children and named them all (if we can remember what we named them) as well as gave the parents last names and professions.  Because we are totally creative and above the Wii, nevermind we’re currently not sure how to plug the Wii in.

We’ll introduce some of the other characters soon, like Belle who teaches little elementary students.  It seemed appropriate that she be a teacher.  Ariel has a job at Sea World, naturally, and, well we’ll reveal the others as make them up.

Hope you’re enjoying our little soap opera as much as we are.  If not, too bad, because we’ve got gobs of pictures left!  Bwahaha!