Rick Perry Dances with the Morons

Some uber important stuff happened last week, you guys!  No, not a cure to some dumb illness or anything, it was the premier of this season’s “Dancing with the Has-Been or Never Were Stars”!  We’ve had some bizarre people on the show before, like the 80-something-year-old astronaut, Buzz Aldrin, who had to be pushed around the floor like a shopping cart, and Sarah Palin’s daughter Bristol.  Cause somehow even the children of famous people we hate get counted among the “stars” on this show.  As far as I can tell, her only “talent” came from getting pregnant in high school right when her mother was advocating abstinence for teenagers.  You have to give her points for that, I guess.

But what about this year?  Vanilla Ice is on, because, of course he is.  Also, we have an Olympian, and not just any Olympian, an Olympian who vandalizes property and lies about being robbed, really smoothing out international relations between the U.S. and Rio, just like Romney did by mentioning how much Britain sucked during the Olympics before that!  We’re on a roll, here.  Speaking of politicians who have no business on any floor, be it Senate or dance floor, we have our next, and my favorite, contestant: Rick Perry. 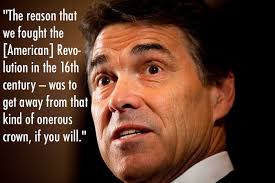 Rick is so smarts.

You might remember ol’ Rick as one of the zillion Republican presidential candidates this year.  Or you might not, since he’s not that interesting and heck no one really remembers who was running this year except for Trump.  But we in Texas sure remember him cause he was, inexplicably, governor here for 14 years.  By his last term, though, even Texas hated the guy, so much so he was nearly beaten by a Democrat in a state that has gone red in all political elections for years.  Democrats don’t even bother running for a lot of posts.  Yet Rick sucked that bad.  So naturally he chose to run for president. And fail.  Twice.  What’s the logical next step?

A reality dancing show, naturally.  If Trump can go from reality show to politics, why can’t Rick go backwards?  He claims he is there to learn how to dance for his daughter’s wedding. You get a glimpse of his unfortunate daughter in the audience, attempting to hide behind the seats before she realizes the camera is on her and puts out a patented forced smile.  They really should have some sort of support group for the children of idiot politicians.  Yet just as he was while governor, Rick has no clue she’s uncomfortable.  He’s rarin’ to go!  No talent, no problem, is his motto.

Last week was his first dance of the year, and it was a goodie, folks.  Ya’ll, I mean, he was awesome.  First off, he forgot he was no longer governor in his introduction.  Then his dance partner proceeds to make fun of his Texas drawl, which I swear all of us do not have.  I don’t – and others, like Merry who have heard me speak, can vouch for it. But for some reason, others do, and sometimes they come from towns just miles away.  There’s no rhyme or reason to it.  Another department at work had a lady we used to call “Miss Twang”.  It was literally painful to be in her vicinity.

But I digress.  If you want to talk about pain, you gotta see this performance. Cause it’s not just about how Rick can’t dance, it’s how he chose the song “God Blessed Texas” (with Rick of course) and this massive set complete with Ferris wheel and no kiddin’ – corndog stand.  Here ya go.

So proud to be a Texan right now, ya’ll.  Here’s some of the reactions we heard around the web after his performance.  I highlighted a few favorites.

Jezebel: Rick Perry, with nothing else to do, will join Amber Rose and Vanilla Ice on Dancing with the Stars – where do you go after 14 years rolling back Texas abortion access and executing the mentally ill?  The dance floor, baby!

Twitchy.com: ‘Dances with the Stars’ teases the Rick Perry vs. Vanilla Ice dance-off we’ve been waiting for

VanityFair.com: Failed Presidential Candidate Rick Perry to join Ryan Lochte on ‘Dancing with the Stars’: Miraculously, Perry is not the first previously indicted Republican politician from Texas to appear on the reality show.

I love these article titles.  Desperation boogie.  Dance off between Vanilla Ice and Rick Perry (make it happen, guys, please!).  The inclusion of “Dancing with the Stars” and “Senate speculation” in the same sentence.  And finally, realizing that he is not the first indicted Republican politican from Texas to appear on this show. That’s incredibly specific there.  Which is why you should totally be watching.  I actually missed the first episode, and had to catch him on youtube, but you can bet I’ll be watching tonight to give you another report next Monday.  We’ll see if the judges’ reactions go from “Eh, you uh got out there um way to go?” to “You’re fired”.  Personally, I hope the voters keep him on there so we can torture him some more.  Because it is up to voters, since those meanie judges gave him 5 out of 10 stars. Rick thought this was awesome, cause he’s dumb.  No, Rick, sorry – that’s 50 percent.  In other words, FAIL.  But hey, you got out there and embarrassed yourself and your daughter, so props to you, sixty-something-year-old politician you!

To make up for that last performance, here’s another one that will amaze you.  It’s by Toni Basil, best known for her hit song “Mickey”.  She’s 72 now – no really she was 39 when Mickey came out – but she still dances better than I ever will.  Check it out.

Wow.  I found this incredibly inspiring.  So much so, I wrote a little song for Rick, to the tune of “Mickey”.

Oh Ricky, what a pity, you don’t understand

Cause we hate you Ricky