I have some bad news.  I think it’s over between us.  Yes, you are ever so hot in that storm trooper armor.  And I do love how you are, well, blunt with people.  Sometimes they need that.  Especially stupid people.

But here’s the thing.  Not everyone is stupid!  Also, it seems like there should be some way to be assertive, but not mean. Cause while I might be a little on the mad side, Blunt Life Coach, you’re just – well you’re just mean.  You’re mean to a good friend of mine especially, twindaddy.

Not cool, BLC. Also, your name does sound like a McDonald’s menu item.

Twindaddy is a good guy.  He loves his kids.  And that’s cool, not wimpy.  He cares about people, especially his friends.  That’s not a weakness as you say.  It’s a strength.  The truth is, Blunt Life Coach, you are a bully.  Forgive me while I quote Taylor Swift.  It’s from her song “Mean” not “We’re never, ever getting back together” though that one applies too.

I bet you got pushed around

Somebody made you cold

But the cycle ends right now

What don’t you know?  You don’t know that twindaddy grows stronger with the Force.  He’s not going to listen to you so much anymore.  Oh, you’ll still be there, in the background, snapping at him, putting him down.  But he knows better now.  And I think he’s strong enough to keep you at bay.

We all have one of you in our heads.  That voice that says we’re not good enough, that we’re stupid, that we should just give up.  Maybe that voice sounds like a parent, or an ex, or some kid on the playground back in school, or a cat whose body keeps disappearing (I will GET you, Cheshire Cat!)  Whoever it sounds like, we can’t let it bring us down.  We can’t let it become our voice, so that we put down everyone else.  There must be, well, balance to our Force.

So that’s a lot to say, well, we are over.  And never, ever gettin’ back togetherrrrr!  Stick that song in your head, dear twindaddy, and I’m sure Blunt Life Coach will be heading for the hills.  If not, I have another solution.  You see, there is a new love in my life.  I think you know him.

HK-47 is an awesome boyfriend.  I can program him to be my boyfriend, you know.  Best of all, he comes with some pretty cool programming of his own.  He kills annoying people.  I’m thinking, since he’s in a video game, that means he can kill virtual people quite easily.  Like you, Blunt Life Coach.  So here’s the deal.  Leave twindaddy alone, or I’m sending him after you. 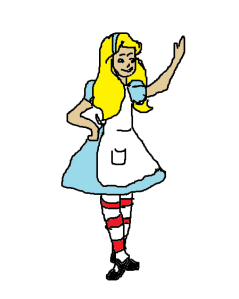 See ya, you meanie,