When I wrote Chipper Cheatin’ Songs, I knew there were plenty I was leaving out.  Thankfully, I have readers who help jog my gerbil memory.  Another of these cheating lover songs with a strangely happy beat is “Christie Lee” by Billy Joel.  Really, this one tops both Dion and Rick, possibly because Joel is singing this as if it was someone else who got messed around by Christie Lee.  Thanks to James for bringing this one up.

In case you don’t know the story, Billy Joel was once married to Christie Brinkley, the model pushing 60 who still looks like she’s in her 30s possibly due to a contract with Satan.  Anyway, while Billy is clearly a musical genius, if you’ve ever had a gander at him, he looks a lot like Kermit the Frog.  So their romance was rather fairy tale like, even inspiring the song “Uptown Girl” where Billy actually picks up Christie at a mechanic’s shop all while singing doo-wop and dancing around in his coveralls.  He never gets in trouble for screwing off at work, probably because the boss was also getting his motor revved by Christie.  But that’s a happy song, and we’re looking at the Romance Gone Bad ones.

Now it starts out okay, as Billy tells us about a story about a saxophone playing man whose name he doesn’t remember (so he calls him “Joe”) and this girl named Christie Lee.   As he says, Christie is a “nice piece of music with a rhythm all her own” and “she really dug his saxophone.”  Now I might be wrong here, but I’m thinking maybe he’s not just talking about music.   Anyway, things start going downhill pretty quickly, though the beat stays relentlessly jazzy.

Billy says “she didn’t need another lover / all she wanted was the sax.”  Oh, hey, I think I get what you’re saying here, Billy.  Or – um, maybe?  He goes on to say “Yes the man had the power to perform / But Christie Lee was more than he knew how to handle / She didn’t need him as a man / all she wanted was the horn.”  I’m not sure what to make of this.  So, let’s just say, for giggles, he’s referring to the horn as his own personal, um, package.  Are we saying Christie only wants his horn?  As in for the “sax” or as a personal momento?  Let’s hope it’s the sax. 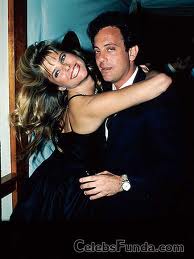 She totally digs my saxophone . . .

Whatever it is, Christie Lee dumps poor Joe but he ends up okay, no worries.  He takes up a new career and everything.

Okay, so I feel a little better now.  He just sold the sax, she didn’t steal it.  Wait.  I’m getting my innuendos all mixed up here.  Anyway, there’s a moral to this story.  “The only time you hit the high notes / Is when you play the Christie Lee.”  Uh hmm.  Yes.  I’ll just bet you hit a lot of high notes there, Billy, er, I mean, Joe.  Of course, Joe.

Ironically, he came up with this song long before he and Christie divorced.  I have to think he made the song up for Christie, since, well, that’s her name, and it’s even spelled the same.  But what an odd song to write for your wife, there.  Hey, honey, here’s a song about some chick that sleeps with guys for their, er, instruments.  I wrote it for you!  No wonder they divorced.

Christie got even with him by painting this album cover.

Anyway, so there’s one more Chipper Cheatin’ song down.  No video for that one, but you can check out the song on youtube if you don’t mind staring at a Billy Joel album cover for three minutes.

Oh, but in case you were wondering about poor Dion, another reader, wordsurfer, let me know that he moved on.  Boy did he move on.  Like with every single girl in town.  As he says, “Oh well, there’s Flo on my left and there’s Mary on my right / And Janie is the girl that I’ll be with tonight / And when she asks me, which one I love the best? / I tear open my shirt I got Rosie on my chest.”  I’m guessing he has a tattoo of Rosie’s name on his chest, not Rosie herself clinging to his chest, though the song doesn’t make that totally clear.  It doesn’t seem like the best idea to tattoo a girl’s name on you if you’re going to be going out with lots of girls, but oh well.  Interestingly, they call him the “Wanderer” rather than the “Slut” because he’s a guy, see, and guys are cool when they sleep around, do ya dig?

Once again we’ve got Dion with his backup singers clappin’ and a snappin’ in the background, playing for an audience that looks like they were given a hefty dose of Valium in their drinks.  Enjoy!