Tag Archives: Where is Olaf?

Bad news.  We think.  The Things and I have managed to lose Olaf.  He’s not in the freezer anymore, so we’re not sure what happened.  Thus no picture of “Hug Me” Olaf today.  Instead we have a report in from Arendelle.

Arendelle.  There is a crazed snowman on the loose.  He has already attacked two people, killing one blue-haired girl and injuring a prince. It is known he can withstand extreme cold and hot butter, and is currently armed with a bendy plastic sword.  Residents are advised to not open a door and just let their work go. The Arendelle police have issued an APB out for his arrest.

Olaf was last seen in a freezer.

Queen Elsa is currently being questioned about any knowledge of his whereabouts, as she was the one who gave him life, which kind of makes her his mom.  Or his god.  Anyway, coming so soon after the whole freezing the entire kingdom incident, this is indeed unfortunate for her future political career.  Arendelle citizens are concerned that Princess Anna might have to take the throne, and her complete lack of experience in – pretty much anything but being adorkable – could be a problem. 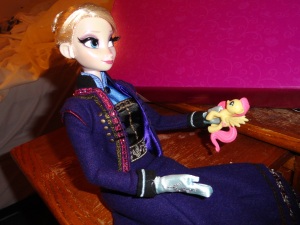 Olaf’s second victim, Prince Hans of the Seven Isles, is recovering at a nearby hospital and has announced plans to run as the first Republican candidate in Arendelle.  He’s not a native born citizen, and he’s evil, but it is believed he has a strong chance.  His solution to the rise in crime is to arm everyone with frying pans, as this seemed to work well in the neighboring kingdom of Corona, ruled by the parents of Princess Rapunzel.  Rapunzel had no comment on the situation.

Kristoff, boyfriend of Princess Anna, is leading a search party along with his reindeer partner, Sven.  According to Kristoff, Sven thinks that the media has blown this out of proportion and that Olaf is just off his snowflake meds.  He dismissed the idea that Olaf might enlist an entire army of snowgies, created from the snot of Queen Elsa, to help him in his mad killing spree.

Anybody with information please alert Alice at her blog as she claims to know these people personally.

Posted in: Writing | Tagged: Arendelle, Frozen, humor, Olaf, this is satire really, Where is Olaf?