Yoga Can Make You Dead! But Sexy!

Yoga has gotten some more attention recently from the New York Times, the highly respected newspaper whose bestseller list includes the literary masterpiece 50 Shades of Grey.  So you know you can trust these guys.  Anyway, one of their prize “science” journalists, William Broad, wrote a book called The Science of Yoga.  In order to warn people of the dangers of yoga, he had articles printed in the New York Times both before the printing of the hardback “How Yoga Can Wreck Your Body” and then later the paperback  “The Perils of Yoga for Men”.

But mostly the risks.

I read both articles and the negative and positive reviews on Amazon.  The positive ones assured people that while the articles were biased and showed no sign of actual science, research, or journalism, the book was much more balanced.  So I checked it out of the library to find out for myself.  Now I’m going to give you my total professional opinion of this book, okay, so get ready.

It sucked.  It really did.  I tried to go into it with an open mind.  I mean, yes, recently I’ve gotten into yoga, but I’m not so into it that I can’t admit that there might be problems with it.  I think it’s common sense to look at certain poses and realize there is slight potential for stuff like muscle strains, dislocated bones, and decapitation.  And yeah, some of the claims I’ve seen are a bit out there.  I highly doubt that yoga is actually going to remove that wart on my hand or cure AIDS.  On the other hand, it does help with a lot of other ailments.  Even if some of that help is pure placebo; if it works, it works.

I see no danger here.

Not according to Broad.  This guy, who says he’s done yoga for years, seems to have some sort of personal vendetta against yoga.  He mentions sustaining an injury, but admits that this was mostly because he wasn’t paying attention, so that hardly seems enough reason to hate yoga.   I think some yogi pissed him off somehow.  Maybe a yogi stole his car, or his girlfriend, or his journalistic integrity.  I’m not sure.  But he goes above and beyond to try and prove that yoga is dangerous, and yoga instructors are untrained and/or stupid and/or malicious.

Now I’ve had my doubts about whether a class is the best place to learn yoga.  There’s not as much one on one attention, and it is true that teachers (in general) only need to have 200 hours of instruction to become certified by the National Yoga Association.  The exception to this is Bikram Yoga (the yoga done in boiler rooms) whose teachers have to have a lot more training and also be certified insane.  In most yoga classes, everyone is expected to do the same thing and not every body is exactly the same or at the same level.  So at the moment I’m considering my options.  Is it safer to trust someone who is working with several people and might not be qualified or working with myself (ie someone who is definitely not qualified) and a DVD or book.  I’m not sure.

One of Broad’s big problems is that yoga isn’t regulated by the federal government (cause we can totally trust politicians), and the injuries aren’t tracked down to the last person, so it’s possible that there are bazillions of injuries out there, all due to yoga.

Quick, everybody, throw out your yoga mats!  We’re all gonna dieeeeeee!!!!!

Of course it’s also possible that there are injuries out there related to working in a library (I can attest to that.  The secretary gave me my very own box of band-aids for my desk.) and raising children (they don’t even require 200 hours to quality for that, just like, five minutes) and writing (zomg carpal tunnel!) and come to think of it, I’m surprised I’m still alive.  These science people need to get on the ball and study this crap, pronto.

Librarian is a very risky profession.

Anyway, I read the book, peeps, I did.  I didn’t see a lot of documented science there.  I saw a lot cherry-picking and ego-tripping (he is like TOTALLY the very first guy to ever realize that people can get hurt doing yoga you guyz!) and sensationalism.  The most controversial chapter was about yoga injuries.  He had some questionable studies from the seventies and a couple of individual stories.  In one a woman sustains injuries by falling asleep while in a forward bend.  Who the hell does this?  I think my chances of falling asleep while folded up are rather low, personally.  Same for the guy who sat meditating for days at a time.  You  mean that might get sore after a while?  You THINK?

His biggest scare is the STROKE warning.  It IS possible to have a stroke while doing yoga.  Also while getting your hair done at the beauty parlor.  And while reading 50 Shades of Grey (maybe not, but it wouldn’t surprise me.)  The biggest reason behind people getting strokes comes from people bending their necks all crazy.  So don’t bend your neck in weird directions, okay, guys?  There.  I have officially saved your life. Give me my Pulitzer now. 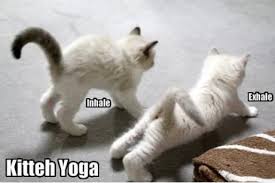 QUICK! Save the KITTEHS!

He does talk about more than injuries (although the OMG YOGA IS SCARY) is sprinkled liberally throughout the book.  He says yoga can make you fat.  No, really.  That’s why there are all those fatty yogis out there, doncha know?  He says it slows down your metabolism.  Okay, so yoga isn’t going to trim you up as much or as fast as frantic aerobics (unless you try that Kandalini chick’s stuff) but people do lose weight.  Part of this comes from the mental changes.  He acknowledges that Yoga is good for depression and other people with whacked out brains.  But even this bears a hint of condescension.  Like, okay, so it helps people with the mentals, but nothing physically, and that’s we want, right?  Nevermind that whole mind-body connection thing that’s been studied with actual credible studies.  Pfft.

But here I’ve almost missed the best part, the other part that is also liberally sprinkled throughout the book.  Sex.  Sex, sex, sex.  Yoga, according to Broad’s research, was founded by sex-crazed perverts called Tantras.  That’s where Tantric Yoga comes from, and all those revered gurus?  Yeah, they were like having crazy yogasms all over the place with girls, girls, girls!  The scandal!  I mean, have you ever heard of a man in power having indiscriminate sex?  I know!  I was shocked too.  But it’s true – if you do yoga, you will get huge sexual rushes.  This makes me especially concerned about my last post on yoga for children.  But hey, it’s never too early for sex education, huh?

Of course, this leads to a bit of confusion.  Yoga is not going to make you fit.  In fact, it’s probably going to kill you dead.  On the other hand, yoga will give you really hot sex.  Decisions, decisions.  Dead or sex?  I will have to meditate on this a while.  If I don’t get back to you, well, if the mat’s a rockin’, don’t come knockin’, kay? 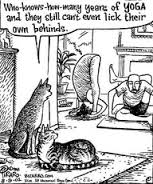 Got this off pinterest. Not sure where this is from, but I love it.

P.S. Have you guys read the book or the articles?  What’s your opinion?