Ah, divas, everybody knows one.  She thinks she’s like all that, you know, and shows off and wears rhinestone studded sunglasses and uses menstrual cups.  Oh, uh, sorry about that.  I should have put in a warning for any male or squeamish readers.

Okay, then.  Everybody gone yet?  I was looking at Facebook for news again and this Buzzfeed article just popped up.  Pop!  It was about something called the Diva Cup, which I had never heard of before.  Yes, I have a hippie-ish friend who once mentioned using a cup thing for her period but I think I changed the subject because yuck.  Cups don’t go up there.  As Buzzfeed clearly points out in the title of their article: 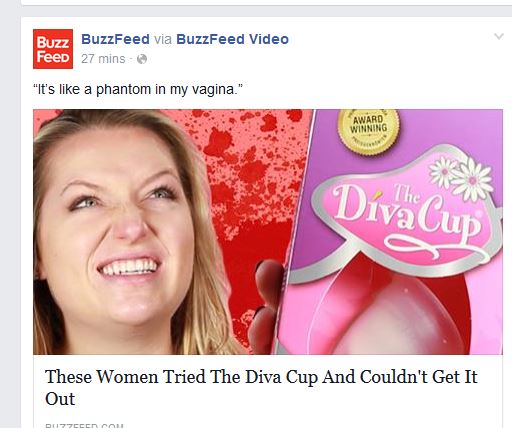 “The phantom vagina.”  Wasn’t that a Star Wars movie?

I’m not sure what was the most whack – the title, the tagline “phantom in my vagina” or the picture of a clearly uncomfortable woman.  What on earth did she stick up there?  Is it like those balls that Anna put up there in 50 Shades of Grey?  Wouldn’t it have been funny if those balls had gotten stuck up “there” in Ana?  I think so.

Before any passionate users of these cups – and there are apparently several different brands of this thing with names like “Fleurcup”, “MeLuna”, “Lunette”, and “Round Sucky Bell Thing” – complain, the article is actually not overtly negative about this form of period management.  Some of the women seemed to like it, though most of them, understandably, looked a little uneasy about the idea of using one for the first time.  I mean, who hasn’t pondered how wise it would be to stick foreign objects in an orifice?  And then done it anyway?  Lots of people on TLC for one!  Sometimes it results in embarrassing trips to the ER (where it is all filmed).  Other times you get a baby (without knowing it was in there either).  This is not to be dealt with lightly, folks.

Of course some women have stuck tampons up there for years (not at a time), something I never did back when my “Auntie Flo” used to visit me against my wishes.  I used sanitary pads which are not at all like diapers (which my Thing Two mentioned to my Thing One who was not amused) even though the commercials are almost exactly the same.  Except the women crawling around in the period commercials are not as cute.  Thing Two has not yet experienced the joy of becoming “a woman” although she told us years ago when she was about seven that she knew just what a period was – a punctuation mark at the end of a sentence.  We just nodded and told her she was exactly right.

See, it’s cuter on these guys. Still gross, though.

I actually quit having my “little friend” come by when I had my baby-factory removed years ago, a result of my last uterus renter liking to jump very hard on the floors.  I haven’t missed it one bit.  But some women still have to use this stuff, including my Thing One, who would die to know I was talking about her in this article but will never find out because she’ll never get this far into my post.  I think her initial reaction had to be the most perfect one ever.

But back to the cup!  Isn’t it cool that now women and men get to have one?  Only a guy’s goes on the outside, whereas women have it inside, just like reproductive organs which were, as Dave Barry says, designed by Mother Nature apparently as a joke.  Yet it’s a normal monthly inconvenience for half the population, so why are we so squeamish talking about it?  Just cause it’s blood leaking out of our hoo-has and . . . I just grossed myself out there.  Maybe that is why.  I definitely remember being a teen and absolutely, positively not wanting anyone else to know I had a period, even going so far as to frantically cover up the pads in my grocery cart lest someone find out that I . . .  was like every other woman on the planet.

We totally saw your pad.

So we have these women trying on the cup on film – blacking out the bottom of the frame so we don’t see anything dirty.  I’m sure they were actually inserting these right in front of the camera person.  They had different reactions.  One complained of leaks, and another that she was concerned about getting it out again, and then some thought it was okay.  Kind of like when you’re asked to select your form of torture – the rack or the thumbscrews?  Lemmie think.

So the women put it on up there, and had cups of blood (that would have been convenient for Edward in Twilight – sorry) they later got to dump out.  This is better for the environment and all that, but I don’t think I’d personally want to pour one out.  Or put one in to begin with, because I know I’d be one of the morons who did it incorrectly and had to go to the doctor for removal.  So I’m glad that’s all behind me.  Uh, so to speak.

Many people in the comments were very irritated that Buzzfeed used such a misleading title on their article (which isn’t like them at ALL), and enthusiastically rejoiced in the benefits of their Diva Cups.  You go, girls!  I couldn’t help but notice there were no comments from guys.

I’m starting to wonder if I will have any comments.  No matter!  Someone had to tell you about this, and I was just the girl to do it.  You’re welcome.  Here’s the link and the video, in case you for some bizarre reason, want to know more.

Posted in: Health | Tagged: buzzfeed, humor, I enjoy being a girl, menstrual cups, periods, the Diva Cup, you wrote about what?