So the other day the girls and I were discussing how salt and pepper reproduce.  Yes we were.  Don’t look at us, this happened in a cartoon – FOR CHILDREN!  Blue’s Clues, to be exact.  Now I touched on this weirdness in my review quite a while back (LINK DROP) but it still bugs me, because I think about this kind of stuff instead of say, world peace.  One thing is for sure, world peace ain’t never gonna happen while condiments are allowed to party in the kitchen cabinet while you sleep.

So what am I talking about exactly?  If you guessed Mr. Salt and Mrs. Pepper and their spice spawn, then I’m really sorry, cause that means your brain is storing the same useless information as mine is.

A brief summary of Blue’s Clues.  There’s this mentally challenged guy named Steve or Joe, they’re pretty much interchangeable, and he has a dog named Blue.  She can’t talk so she gives “clues” using paw prints.  Now the weird thing about this is that while the dog can’t talk, practically everything else can.  Soap, a side table drawer, a shovel and pail, possibly Steve’s underpants, and of course the salt and pepper shakers.  Who are married.  Of course they are. 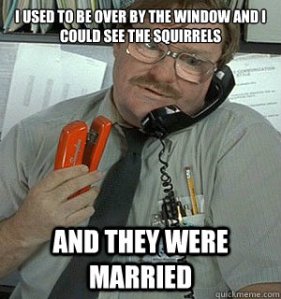 But that’s not all.  Oh, no.  Mr. Salt and Mrs. Pepper have a BABY.  Her name is Paprika.  I can’t for the life of me figure out the logistics of this – there’s just too many holes.  I mean, in the lids.  Besides that, I’ve tried combining salt and pepper together and I do not get paprika.  Thing One found a video that discusses why they made Mr. Salt and Mrs. Pepper talk and not Blue, and how they wanted to teach kids about getting younger siblings and . . . wait, what?  That’s right.  It happened AGAIN.  They had another baby named Cinnamon.  I think this is getting out of hand.  In this video Neil DeGrasse Tyson – yes the astrophysicist – asks why Blue can’t talk and Paprika, the inanimate object, can.  Pay special attention to 1:12 in the video for something really whack.

It’s not just the salt and pepper having funsies, you guys, nope.  If you look at the frame below, you can clearly see  what looks like a baby mayo, ketchup, mustard, hot sauce, and I have no idea what the green one is – guacamole?  Who knew this could happen?  And if it can, why on earth do we go to the grocery store?  Why not just breed our own condiments?

This cannot be happening.

I’ll tell you why. Because it’s just WRONG, that’s why.  If we allow this marriage of Mr. Salt and Mrs. Pepper, who knows what will be next?  Col. Mustard and Mrs. Ketchup making their own special sauce?  I don’t think so.  That’s why I have all my condiments and spices spayed or neutered, and you should too.  And never, ever let your salt and pepper stay in the same cabinet, not unless you really need a new spice rack in the next few months.

Mr. Salt and Mrs. Pepper offer up so many other questions.  Like, when you refill the salt shaker, is that like a blood transfusion?  If it runs out of salt and you wait too long, does the shaker die?   What about if the spice inside the shaker passes the expiration date?  Is that like old age?  If so my spice rack is a freaking morgue.  Thing Two claims a friend of hers actually buried an empty salt shaker after exposure to Blue’s Clues.  Really, people, we must think about the CHILDREN.  I can’t believe Fox News hasn’t picked up on this smut we’re showing to our impressionable youth by now.

Also, try not to think about what Steve and Joe do with that poor living Soap.  No – no, not there!!!!

This disturbing PSA brought to you by Alice and her Things.