You may have heard of The Blob.  It’s an old horror flick about, well, a blob that goes around sucking people into it.  There are several iterations of the same villain, such as The Creeping Terror, which was so scary that the actors would willingly help out by climbing into it.  But the Blob I’m talking about is like me, cause that’s how I feel when I have little energy but am still expected to do things.

Blob is the result of years of art class. Say “Hi!” Blob.

I spent a while thinking of what color to make Blob.  First I considered black, but I’m not that far gone, and Blob is not emo, just blobby.  So then I considered other colors like yellow (too sunshiny), brown (too poopy), red (too bloody), pink (too frilly), and gray (too bland).  I finally settled on lavender, cause it looks grayish, but with bits of purple trying to poke out.

I don’t feel that sad most of the time now.  I know I can do things, heck I even make plans sometimes to do the things.  But then this inertia sets in and my body says “Haha brain, yeah we like sitting.”  An object at rest tends to stay at rest, especially if said object is me, and it doesn’t really have anywhere it HAS to go other than dropping and picking Things (ie children) up at school.  So after said chore is done in the morning, it’s easy to drop back into bed, but not easy to get out.  So I sort of have to slime my way.  Here it is in four simple steps. 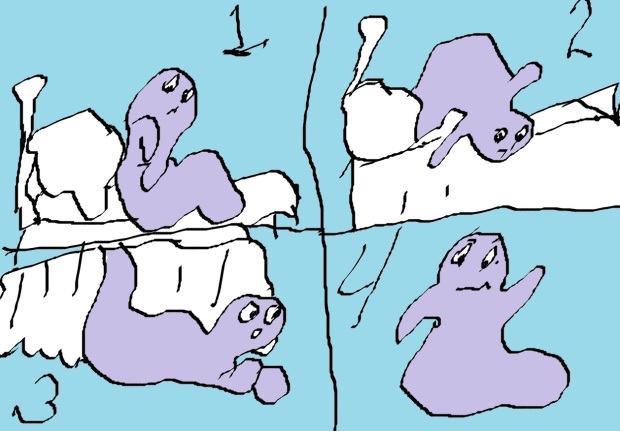 I used a similar method for getting out of bed when I was very sick with pneumonia. I’m not that sick now, though I am getting over yet another respiratory infection and the antibiotics that treat it by making me all nauseous.  But really, this was happening before any other physical cause.  So I’m thinking blob might be a slight lack of motivation on my part.

I can blob my way to the kitchen, sliming around, grabbing a bowl I keep clean, avoiding the pile of dirty dishes, and then sliming back to my computer where I do important business.  Like surfing the internet or drawing blob pictures.  But inevitably I will need to do something like say – those dishes.  Or the laundry. Or get those groceries.  Or maybe try to join a gym because I am very out of shape and exercise gives you energy, right, if you can get enough energy to do it!  The gym is, literally, one block away from me.  And it’s open 24 hours a day.

But it’s never that simple!  You can’t go to gym until you have clothes to wear to the gym.  So you slime over and wash clothes.  And yay you have a shirt, an exercise squeeze-you-too-tight bra and yoga pants that show all the wrong curves!  Great.  Missing just one thing.  Something you really ought to have a lot of no matter what you do.

Where is the UNDERWEAR???

It is really bad for me to lose something important like underwear, especially when it is really hard to find underwear that fits right.  As of late, it has been harder than buying jeans, and nothing should be harder than that.  So I tried on type after type  until finally finding one with no elastic in the waistband at all (as it should be) and of course they don’t have my size, which is monster size according to Wal-Mart.  Keep in mind I wore a size 8 when I was 5’7″ and 130 lbs.  That is considered X-large right there.  I have to wonder what really obese people wear, cause while overweight, I still consider myself relatively normal.  I guess they have to follow Babar the elephant.

This is where I am heading.

I don’t want to have to go to the Big Store with Babar.  I don’t trust stores that let in elephants who steal the purses of old ladies.  So that means I must try to not get any bigger.  Or blobbier.  So after all that laundry and underwear searching (Alice does not go commando), I am way too exhausted to think about the gym.  I’ve also worked up an appetite.

Speaking of appetites, another thing I could do to improve energy is to not eat so much not nutritious food.  They say eating healthy (green) things makes you have more energy, or some such nonsense.  So I make a pledge to find out what food constitutes healthy that I can force myself to eat.  This lasts five minutes until my husband brings home Cocoa Crispies cereal.  Really?  What was I supposed to do?  They were THERE.

So I have these two creatures I have to face: motivation and self-control.  You might have met these two before if you’ve read my blog in the past.  They have names.

Pony sat on my motivation.

Squirrel has amazing self-control. He only ate 500 nuts this morning before puking.

I’ve been slightly blobby for a while now, but I always had somewhere I had to be in the past.  Someone to check to make sure I was not blobbing 24/7.  I don’t have a parent or a boss standing over me now, so that someone is going to have to be – yikes – me?  They say pick a friend and ask that friend to hold you accountable for doing stuff, but yeah, I don’t have a lot of friends, and those I do have I don’t dislike that much.  Also some of them have blob issues as well.

Have any advice for blobs?  Feel free to offer it in the comments below!  I will slime over and read them – eventually!

Putting the “Dis” back in Disability