Better To Be Dead Than Fat

Yesterday I saw an article posted on Facebook about Adam Richman, the guy from Man Vs. Food.  I’m not sure if you’ve heard of that show – it’s about a guy who travels the world and shovels food in his face to win such novelties as a T-shirt and heart disease.  But, hey, he travels!  So totally Travel Channel.  I’m just shocked it wasn’t on TLC.

Gonna have to place my bet on the food.

Though no one on TLC, it turns out, is as big a scumbucket as this guy.  It makes me angry to even recall it.  The show has been off two years, though Travel continues to show it again and again.  In that time, dear Adam lost a lot of weight.  Yay, now he looks so much older!  Oh, and he’s totally healthy because thin!  He posted a selfie of himself bragging about his weight loss and using the hashtag “thinspiration.”  Turns out thinspiration is a term people with eating disorders use.  News to me.  Anyway a blogger named Amber Sarah (who OMG is fat!) told Adam about this and he said “Oh, didn’t realize that.  I’ll just drop that particular hashtag.”  Hahaha, no of course he didn’t.  He told her “Do I look like I give a f**k?”  She tried again, and got a friend to try, and when they were ignored, she hit up her followers who started bugging him.  So he just ignored them.

No, of course he didn’t. He went freaking off the wall crazy, tweeting such gems as “If anyone acts like a c**t, I’ll call them one.  It’s not misogyny, it’s calling a spade a spade.”, “Eat a bag of sh*t”, and most chilling of all “Seriously, grab a razor blade and draw a bath.  I doubt anyone will miss you.”

It is impossible to fully express my anger at this because it’s wrong on SO many levels.  And it just gets worse if you look at the comments.  I know, I should never do this, but I thought surely people would be as enraged as I was.  Nope.  Here are some of the responses from various articles.

Is bad, bad, bad. Unless you are paid to eat it by the ton.

“There is no excuse for HER behavior.  She weighs 1,000 pounds and doesn’t want anyone else to be happy that they are thin and in good shape.”

A picture of her – on her article – with the caption “Its Tinkerfat the land whale princess.”

“People are way too sensitive.  I don’t think anything he said was wrong.  He’s lost a lot of weight and is proud of himself, as well he should be.”

“Who wouldn’t want that nutjob to commit suicide?  He may have been ranting, but be honest . . . most of us were cheering him on because we are so damn tired of people trying to cause trouble or thin skinned or offended by small thing.  I know he’s in the public eye and has to apologize . . . but I hope it is the fakest damn apology ever.”

“Since when does a “Blogger” like that monster Amber Sarah have the power to get a television show pulled?  She’s a BLOGGER! They aren’t real! That pig should take note of what he did and hit the gym.  So sick of Liberal PC nonsense ruining people’s lives.” 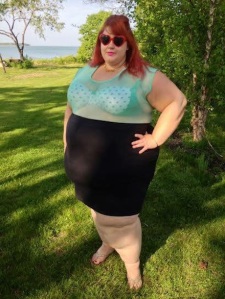 Commenters who disagreed with these views were often disregarded with slams like “You must be fat yourself.”  Right, cause you have to also be overweight to think telling another human being they should kill themselves because they are worthless is wrong.  Here’s news to these people, and to darling Adam.  There are PEOPLE on the other side of that screen.  People who kill themselves everyday partly because they are judged by their appearance.

The ironic thing is that many overweight people are not unhealthy.  They eat well and exercise.  Some people will always be thin because of metabolism, even if they eat McDonalds for every meal.  That doesn’t make them more healthy.  And even if the person IS an unhealthy weight, that doesn’t mean their brains work less.  It doesn’t mean they are worth less.

I am disgusted that my daughters must grow up in a world where completely unrealistic body images are seen as the norm, and deviating from that means ostracism, discrimination, abuse.  Where it’s better to starve oneself than to have a little meat on your bones.

Adam has the right to “free speech”.  So did the blogger.  And the Travel Channel had the right to “postpone his new show indefinitely”.  There is such a thing as karma, Adam, and consequences for your actions.  I only wish his losing his new show was the only consequence, but it’s just a symptom of a very sick world where it’s better to be dead than fat.