Delegates, PACs, Caucuses, Primaries, and other words with no meaning

Early voting has started for the Texas primary.  I know because there are massive amounts of Trump signs out in the lawn by one of our voting places.  I think the building has something to do with city government, but really don’t care because the city is run by Republicans.  I did see one Bernie Sanders sticker on the back of a car.  These are brave people.  I’d be afraid of having my bumper shot.

Anyhoo, I should get over there and cast my vote.  My husband votes Republican (I have attempted to reason with him, and barring that, possibly drug him, to no avail) so we act maturely and often vote without each other.  And don’t tell the other person. You know, in case he or she forgot.  We never forget.  But it’s a fun game we play.  He’s not into politics really, which is how we stay married.  But he still votes Republican because it runs in the family or something, like mental illness.  At least we can agree on one thing.  Neither one of us can stand Trump.

I will never, never tire of this picture. It should be plastered on all his campaign photos. They’d still vote for him.

But like acid reflux, he just keeps coming back up.  I actually did try to read a little on this primary caucus thing, and now I am officially way more confused.  They’ve had primaries (or caucuses?) in Iowa, New Hampshire, Nevada and South Carolina, though not all take place for both parties at the same time, and some are decided and some are not and some are closed and some are open and some are mixed (like candy!).  I have no idea why exactly.  I do know Trump is winning a lot. So is Hillary.  (Like there’s been 4 states out of 50!  The media has totally called it already!)

But according to my lawyer friend who does not get news from Facebook, Bernie still has the popular vote of the Democrats.  I’m not sure anyone really has a strong vote with the Republicans, since some still refuse to bow out, even if they have no percentage of the vote.  And some states have split delegates, and are not winner take all though everyone says they have won, and certain delegates have pledged themselves to each (What are delegates again?  Who are these people?  Can I be one? I can delegate great!) but Hillary has the super PACS (like Pac-Man?) and I’m still not totally hip on this whole delegate / PAC thing.  I keep thinking that we should just, you know, vote for who we want ourselves. But what do I know?

My thoughts on this.

I do know I haven’t heard much about these states in a while (I totally forgot about Iowa), so way to go getting your state noticed, guys!  But you should know, there is a lot of stupid out there, so please sane people who happen to want to vote my way, get out and vote.  Even vote for Hillary.  Though I think another four years of Clintons will be torture, it won’t be anything like what we’ll get with one of these wackamoles in the other party.  At this point I am actually missing Romney and McCain, you guys. That’s bad. That’s super bad.  And Super Tuesday (it’s not a football game, sorry) is coming up and we’ll get primaries from several states, including my quiet, unassuming little state Texas.  I’m not scared AT ALL.

But back to the headlines, which stay as wacky as ever! 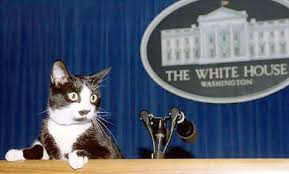 Brought to you by the ghost of Socks the cat.

Funny, I thought his rise to power came after the opening of the Seventh Seal.  And what is Bush Republicanism exactly? Sort of kind of sane Republicanism?

But Pat is like on the 700 club.  I thought it was supposed to be good to be a sheep so Jesus can be your shepherd?  But what do I know?

I STILL know more about politics than most Trump supporters. Baaaa.

Trump tweeted “Jeb Bush forgot to renew the rights to his domain name for his website.  Guess who bought it?”  You know, sometimes I forget we’re running an actual political campaign here with all this here tomfoolery!

Aw.  Jeb, please know, your political ads were the bomb and I will never forget them.

Jeb doesn’t get politics either.

OMG, the heroism.  So you were in a prison camp?  Big deal, John McCain!  Rubio has to see the dentist!

Cruz: ‘We are the only campaign who can beat Donald Trump’

Well, you did do it one time out of three.  But – yeah that doesn’t make me feel any better.

These guys sure are a hoot.  Thing One discovered a video called “Trump and Friends” which puts the faces of political candidates on the trains from Thomas the Tank Engine, and makes the trains even more disturbing.  But it fits perfectly, considering those trains were always being jerks to each other.  Enjoy!