In case you didn’t know, Sad Pony and Squirrel are now on Facebook.  I thought I would let you know what’s going on with them, Facebook wise.  So here’s some shots I took of the page.  I have deleted any real names to protect the guilty.  Here we go – Sad Pony’s profile page.  Click on the pictures to enlarge.

Yes, he really does have a facebook page. What? I can’t keep an eye on them all the time.

Next up is Squirrel.  I think he’s going to be the one hardest to keep in line here.  Get ready for the parental controls.

Sure he LOOKS innocent.

A few of you  have played along and friended the two.  They are especially excited about finally finding Miss Four Eyes.  Check out some of Squirrel’s recent posts.

Shouldn’t have let him have that Latte . . .

Squirrel has also been taking pictures of himself and uploading them to the site.  I’d better watch out or pretty soon he’ll be on Instagram, posting pics of his nuts. 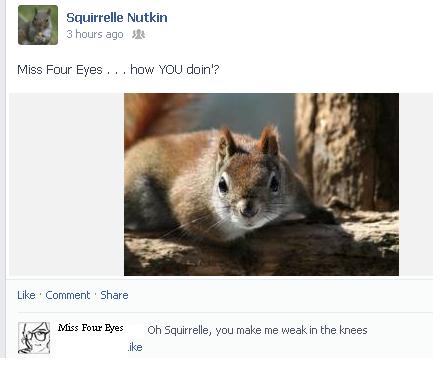 Of course the two interact together as well, which can get complicated since they have to share the one computer.  Sad Pony has that awkward hoof problem and Squirrel – well, I think you know his issues.  Anyway, here’s a little correspondence between the two.  Note that Sad Pony is a fan of Snoop Dogg and that there really is a band called Tired Pony. (Click to enlarge) 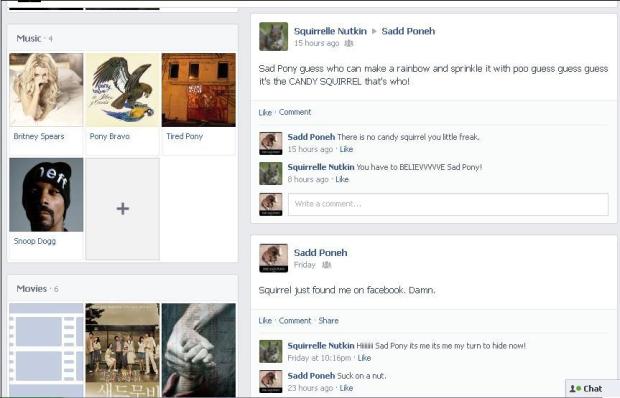 I predict flame wars in the future . . .

Oh and HEY what’s this?  I’m going to have to watch what these two are posting up there.  Not nice, Sad Pony.  I am not evil.  Well, not always.

I get no respect.

How long will this experiment last?  How long is my attention span?  I have a feeling they’re going to be retiring soon.  I’m feeling some of the same creepiness I felt before.  Like all the friend recommendations.  Yes, even a squirrel and a pony get friend recommendations.  One was for Jethro Gibbs of NCIS – the fictional character, not the actor who plays him on TV.  How ironically perfect.  The others are people I have never heard of, and I kind of doubt they’d want a depressed pony friending them.   I’ve considered randomly trying to friend as many people as possible just to see who would take the bait.  But I don’t know.  Right now Sad Pony is giving me trouble about it.  He’s SUCH a killjoy.

I’ve considered getting another Alice Facebook page.  I had one, ages ago, lost interest and deleted the account in one of those rare acts of “I am not addicted to the Internetz!”  I probably won’t, but I’d be more likely to have one for Alice than another personal one.  I’m not comfortable with that much real info about me out there. I like to pretend there is still privacy.

So what do you guys think?  Do you have a real Facebook page or a page for your blog or both?  What do you think of privacy?  What do you think of animals on the Internet?  I think there are more out there than we realize.  Should Sad Pony and Squirrel keep their accounts even though they aren’t technically old enough – at least in human years?  Anyway, let me know your thoughts in the comments below.